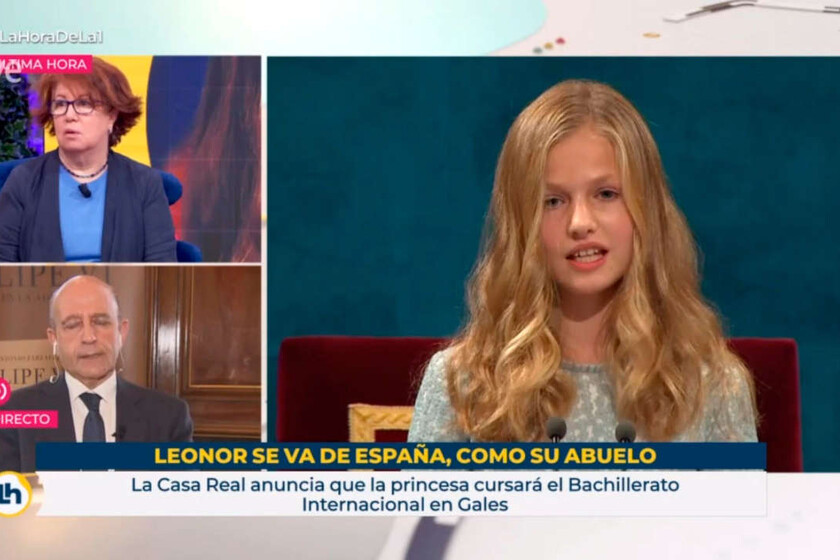 The Supreme Court of Justice of Madrid has ruled on one of the great television controversies that TVE has experienced in recent years. In February 2021 the corporation fired Bernat Barrachina, scriptwriter of ‘La hora de La 1’ for a controversial (and somewhat humorous we could say) label that appeared superimposed on the program. A dismissal that has been declared null.

The sign in question read “Leonor is leaving Spain, like her grandfather” in reference, on the one hand, to the news that the princess was going to study abroad (to Wales) and, on the other, to the departure of the emeritus king to Abu Dhabi.

A message that did not take long to attract attention and for which he apologized live to later announce that they had relieved those responsible. Although the word was ambiguous, we soon learned of the dismissal of Barrachina, a scriptwriter belonging to an external production company for the TVE magazine.

The label was not offensive

A year and a half later, the TSJ has declared invalid this dismissal to the worker, ordering his reinstatement and compensation of ten thousand euros. He thus revokes a first decision back in September, which supported that dismissal. In the sentence, the court does recognize that the label was inappropriate and impertinent.

Nevertheless, that doesn’t necessarily mean being offensive or that the honesty of Princess Eleanor be questioned. They do not see, therefore, an intention to offend:

“The expression used is not likely to be taken into account in the public concept as outrageous, even though subjectively certain people may consider it so. On the other hand, neither the literal tenor of the label nor the context […] It can be deduced in a well-founded and logical way that their insertion would have a negative effect on the prestige of the Institution”

From RTVE they justified the dismissal because the broadcast of the aforementioned label caused multiple reactions and criticisms against public broadcasting by, above all, the political sphere.

Details of fight between Brad Pitt and Angelina Jolie in flight

What kind of K-Drama would you star in according to your tastes?