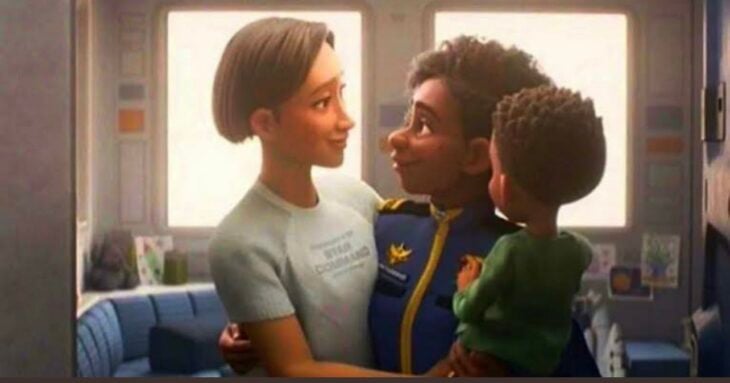 The inclusion of characters belonging to the LGBTQI+ community in film is an issue that has caused quite a bit of controversy in recent months, to the extent that in some countries the reproduction in theaters of films that include scenes of sexual diversity has been prohibited.

One of the most recent cases is the much criticized scene of the kiss between women that appears in the film Lightyear Disney Pixar, which premiered on June 16. In the midst of the controversy, a few days ago, users on Twitter assured that in some rooms of the Cinépolis and Cinemex chains they cut the scene of the lesbian kiss.

The accusations for the alleged censorship of that part of the film gained popularity on Twitter after on June 16, Cinépolis denied it with a publication on its official account, in which a photograph of the film’s advertising poster was seen with the warning “It contains scenes with gender ideology”, that the company was part of a hate speech against the LGBTQI + community.

Important: This image that circulates on social networks does not belong to any of our cinemas, nor does it correspond to our values ​​or our culture. At Cinépolis we are respectful of diversity and all people are welcome in our theaters. pic.twitter.com/hfkJCLwXel

However, despite the fact that Cinépolis denied that the image circulating on networks had not been taken in any of its theaters and that the sign does not correspond to the values ​​and culture of the company, Twitter users became a trend by sharing their experience and ensure that both Cinemex and Cinépolis censored the kiss between two women in the children’s film. These were the tweets More popular:

What a disappointment that several rooms @Cinepolis Y @Cinemex decided to cut a kiss, for God’s sake! A kiss. That courage! This breaks because they preferred to erase us and go back to a reality. Without a doubt, this came to demonstrate the amount of homophobia and hypocrisy that exists in 🇲🇽.

Very bad @Cinepolis Y @Cinemex for cutting the lesbian kiss scene in #Lightyear They are still companies that discriminate and promote machismo. It will be better not to return to their rooms.

. @Cinepolis @Cinemex what to do if the cinema I went to decided to censor a part of the film #Lightyear

I am receiving incomplete service… and it is not what I pay for.

4. There is nothing wrong with the scene

How retrograde, lesbophobic and third world is the cinema in your country?
Well look @Cinepolis Y @Cinemex They cut the scene of a kiss between two women…

5. The important thing is the plot

The comments and complaints were involved in a debate in which the comments and responses were of quite divided opinions, in which some supported the idea that theaters censored such scenes, while a few others assured that people were exaggerating , since it is a simple kiss in a scene that lasts a second.

Faced with the accusations by Internet users, both companies replied in their official accounts and assured that the films are shown as the film studios made them. In addition, they pointed out that being a digital copy, it is not possible for them to make any modifications.

For now, that is all that both companies have said about it, who claim not to have the power to edit or manipulate the content of the tapes, so that everything that is reproduced is what is received by the producers.

We hope that this is just a mistake and that the controversies towards the film do not continue, since its sole purpose is to have a good time and show what the story of Buzz Lightyear was like before he arrived at Andy’s house.

Guys say they wore a diaper to Dua Lipa’s concert

What does Jung Il Woo think of Yuri after filming the drama?

The crockery that sweeps sales at Ikea is not what you think, but it is just as cheap and even more practical

summary and analysis of The Second of His Name