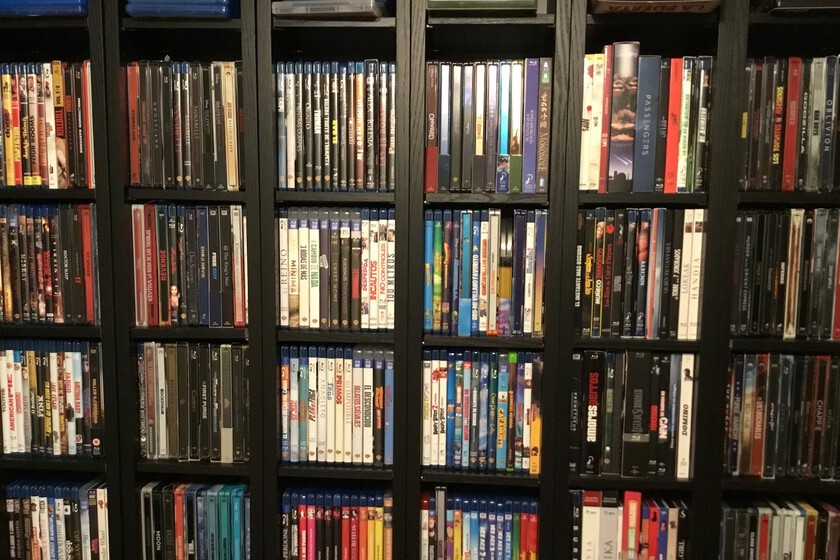 No one can argue that movie collecting not going through its best moment. Gone is the golden age of the DVD in which she reached the ceiling with people of all ages buying her favorite titles. It is clear that the rise of streaming has done a lot of damage, but it would be a mistake to reduce everything to such a basic explanation. There are several factors that have led to a worrying decline in Spain and I think that together we will end up killing it.

The origin of everything

For my taste there was a before and after in Spain with the purchase of films after the arrival of black friday to our country back in 2012. That crazy offer of 50% discount on all available titles led to the overcrowding of stores like Media Markt with countless people carrying baskets overflowing with DVDs or Blu-rays. It was crazy, but the negative consequences did not take long to be noticed.

Slowly, the 50% discount became an offer that could be obtained more often -the rest of the shops could not and did not want to be left behind-. There came a point where the strange thing is that there was no store that had a juicy offer in force whose discount could reach that percentage. Perhaps some title was left out -although there were often small oversights on the part of the stores that left that limitation in nothing-, but it was a matter of a short time to be able to acquire it at half price.

Thus, we moviegoers got used to the fact that there was no need to buy anything at the starting price. Perhaps some very limited edition yes, but on more than one occasion we discovered months later that we did wrong by letting ourselves be carried away by impatience. That led to sales suffering and in many cases profits being much lower, so it just wasn’t worth publishing certain titles in our country.

In this panorama of certain uncertainty was when streaming began to gain strength in our country with the arrival of Netflix in 2015. A multitude of movies and series available at a simple click away and without having to occupy more and more space in our homes. Soon other platforms would arrive that for some offered such comfort that it no longer made sense to have copies in physical format. If then the movie you want to see just isn’t available anywhere, tough luck.

For me, I especially remember the case of the Warner classics. Very careful editions at a very tight price -for a time they were launched at 9.95 euros and even so, many of us waited until the sales to get them for half the price- there came a point where they were no longer published in Spain. Before, its pvp was first increased to 12.95 euros, but, if I remember correctly, by the end of 2016 or the beginning of 2017 the Spanish market was shelved.

It’s not that it was a novelty, because before there were specific titles, including Spanish productions such as ‘Pan’s Labyrinth’ or ‘Alatriste’, which had been released on blu-ray in other countries but not here -and I’m not forgetting cases as bloody as ‘John Wick’ remains unreleased in physical format in Spain-, but yes an important warning note. Since then, more and more films are simply not released in physical format. Even productions as powerful as the recent ‘Moonfall’ seem like they will never be released in our country. Well, in streaming you do have it available on Amazon.

That scenario is something some editors take the opportunity to edit films in a dubious way. To give you another idea, in one of the most important international forums dedicated to collecting, the most prominent topic in the part dedicated to Spain is for releases “bootleg“There are even months that the largest number of releases comes from these publishers who take advantage of a legal loophole to release titles without actually owning the rights to those films.

There are those who do not care and simply want to have their favorite films in their collection, but there is also an important sector of collectors who are clearly against this practice. An additional problem with it is that in some cases it makes it impossible to launch an honorable edition because it would no longer be profitable. Another nail in the coffin.

Parallel to all this came the evidence that it was not worth it for businesses to have a section dedicated to this. Some like Carrefour chose to liquidate it, which at the time was celebrated by some given the bargains they could get like this. Bread for today and hunger for tomorrow.

In other cases, its importance was simply reduced more and more. Those who visited the cinema sections of El Corte Inglés, Fnac or Media Markt ten years ago can attest that It is even sad to see what has been reduced to what at the time almost seemed like a gold mine. And besides, their strategy to try to make it a bit more profitable isn’t working too well.

Those 50% off deals have been getting rarer for a while now. Some specific day as a hook offer, Black Friday (although this year it remains to be seen if they will keep it) and little else. Some are disappointed and are already threatening to simply not buy anything until those promotions return, but others are already starting to assume that it is an inevitable change. What would be disastrous would be to lose more buyers along the way.

In this regard, there is another practice that has become very popular lately. I am referring to the limited editions in metal boxes. It is not a new invention -we already spoke to you in depth about it some time ago-, but a very important change has been noticed lately, and that is that the limited thing is becoming more and more true. This leads to several titles being sold out before even going on sale, with the additional drawback that then countless copies appear on sites like Wallapop at a much higher price.

That is just one more proof that collecting has become something of a niche. There, the distributors win with titles that are basically certain that they are going to sell out, but they do so at the cost of testing the patience of the buyers. If there comes a point where I haven’t been able to buy this or that movie on steelbook, why would I keep collecting like this? Again, bread for today and hunger for tomorrow.

The last worrying addition is the serious reduction of distributors in our country. The majors have lost interest in our market and have ceded that part of the business to local distributors like Arvi or Currency. In addition, several smaller ones have disappeared or been reduced to their minimum expression. There are oases like Upstream or Reel One that continue to give us joy, but one cannot help but wonder to what extent it is profitable for them and what future viability they may have.

The sad conclusion of all this is that film collecting in Spain seems doomed to disappear or become a luxury niche with higher prices and very limited runs. And that the titles that come to be published. Bad outlook, I still believe that the physical format is vital in the streaming era, but we still end up running out of that option. Or at least those for which dubbing in Spanish is essential.

Marvel Creates a Divine, Tacky Show That Looks Like a Guns N’ Roses Record Made Movie

Guy ran after receiving marriage proposal from his girlfriend

Why does King Carlos III have swollen fingers? This is what suffers