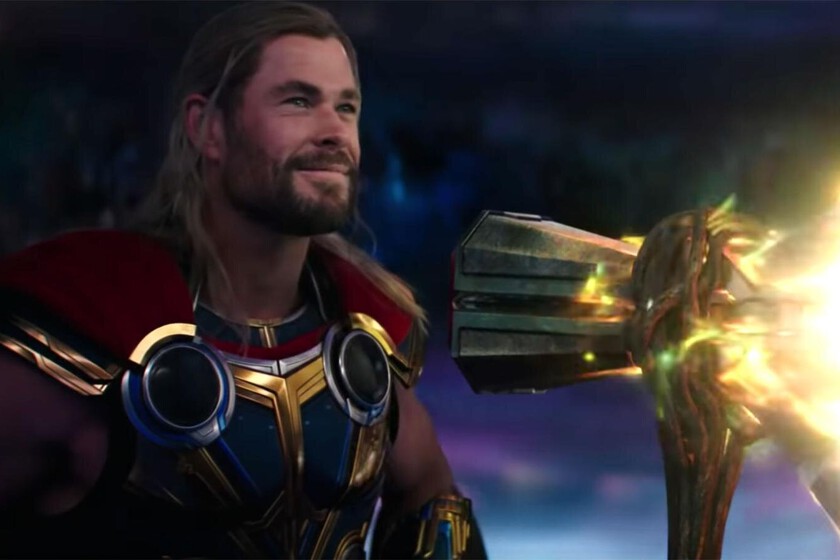 At the start of a press conference for the strongest premiere of the month no one expects it to end with a beatbox duel between the director and the main actor. But when the movie is ‘Thor: love and thunder’ and the two of them are Taika Waititi and Chris Hemsworth, anything is possible. In addition, Natalie Portman, Tessa Thompson, Kevin Feige and a somewhat lost Christian Bale were also present in this massive junket. Let’s see what they told us.

In the first place, it is Chris Hemsworth who tells us what he likes most about playing Thor today: “I feel connected to Thor, especially since Taika came in and made him more adolescent, young and immature. I see it newer and fresher. These kind of movies have to be funny and it’s what we’re doing,” he says, before acknowledging that he is more like the character in his festive episode of ‘What if…?’ than the one we see on the big screen.

Much of the press conference revolves around the changes Taika made to the character, something that Kevin Feige thinks it was a logical evolution seeing the actor’s comic face, and the solution to one of the enigmas that planned on all phases 1 and 2: he is a god, how do we make people identify with him?

Audiences respond to Chris Hemsworth and everything he can do, and Taika has taken it to another dimension that was actually always there. Before in promotional interviews we would see Chris and be like “Is he trying to be funny? No, it’s funny, it’s hilarious!” I saw a clip from ‘Age of Ultron’ the other day when he tries to make Ruffalo feel better after hitting people and it’s so funny, he has perfect timing. Taika told us “What are you doing with him just taking the hammer and calling lightning? Let’s do that and add everything Chris can do to it.”

Taika Waititi takes a similar view: “I’ve become friends with Chris because his personality is one that I would go on an adventure with, you can trust that he will be there. I just exaggerated his qualities and made Thor more Chris, in reality. It’s not acting”, something to which Hemsworth replies “It’s a documentary, actually”.

Natalie Portman, who in this new installment gets into Thor’s suit and carries Mjolnir in her hand, tells how excited she was to put on the superhero costume on his return after saying that Marvel’s doors were closed almost a decade ago: “It was crazy to put on the suit after seeing Chris wearing it for so many years, it was surreal the first time.”

It is Hemsworth himself who indicates that Natalie “he hit it in the gym”, to which she replies “I just have a renewed respect for what Chris has been doing for a decade because I didn’t see all the work behind it. I didn’t see what was going on behind the scenes: the choreography, the exercise…”. In addition, she takes the opportunity to comment that Jane Foster is a way of exploring how superheroines can also be sensitive, vulnerable and even weakand find your strength in it.

The villain of the show

Christian Bale, who plays Gorr, is new to Marvel, and he himself has admitted that he didn’t know what the MCU was before shooting. Yes indeed, he is convinced he knows why they caught him.

When they saw everything they were looking for in Chris they said “Go for an actor who is his polar opposite, someone who you can’t relate to, a loner, who is scary, who no one wants to be around and who no one wants. watch”. And they said “Yes, we have found it in Bale”.

For an actor of Bale’s level, getting into Gorr’s skin was simple: “It’s a great pleasure to play him, it is much easier to be bad than goodChris has a more difficult role, because people are fascinated with the villains. Although this character is a monster he can be understood. Makes terrible decisions, but it is possible to understand why this is so“. Of course, when it comes to answering how he created the character, he has no doubts in giving credit: “With three very talented makeup specialists who put it on me every morning for three and a half hours, and are absolutely responsible for Gorr’s look “.

This loyalty is normal: as much as he saw concept art, he didn’t feel what he was capable of doing with the character until he saw himself stuffed into his body: “You don’t know what you’re doing with a character like this until you see him completely.. It’s in your imagination, you think about it abstractly. Then you see his tattoos, and the scars, and then you start experimenting and playing with him as you go along.” For Hemsworth, Gorr is his favorite MCU villain: “I love everyone I’ve worked with, but this one is particularly special. . There is an empathetic quality, a vulnerability. What he does is wrong, but there is a motivation behind it. He has done an amazing job.”

And what about the dance scene with Kate Bush that was rumored a few weeks ago? Well, it seems that it was more something said in whispers than something real. “Taika and I are huge Kate Bush fans. and we wanted to do that scene. We knew it wasn’t going to end well.” Tessa jumps at the chance to try to give us a moment for history: “It’s something we should do now”. Sadly, it doesn’t look like Christian Bale is up to the task.

When asked what it’s like to shoot with Taika, it seems like such a fun world that it can only lead to movies like ‘Thor: Ragnarok’ or ‘Thor: Love and thunder’. Says Hemsworth: “Shooting with him is different, a beautiful chaos. It’s a journey of self-discovery and exploration, fun and crazy with music playing in the background and where you stay behind the camera laughing and messing up most of the shots.” “That sounds horrible,” Taika acknowledges.

It is not the best. He gives you a lot of freedom and has a passion and enthusiasm that infects everyone. He loves these stories and these characters, and because he’s a fan, he tells you what he wants to see, what he wants to try. “He tries this, he tries this”, no matter how ridiculous it sounds: everyone is on board. That’s why you have this unpredictable spontaneity in any of Taika’s movies.

Bale himself acknowledges how much he liked having music on the set. About the music, in the film they don’t stop playing great songs, one after another. He has an explanation for Waititi: “We spent as much money as we could on songs”. Once you listen to the soundtrack, you have no doubt. But, in addition, the aesthetic is reminiscent of 80s rock covers: “The tone of the film seems like something I would draw in my notebook in class while I wasn’t listening. Back in school while perfecting the Metallica logo , so This is another one of my dreams that has come true.“

However, as good as the shooting environment is, in the end the film is finished in post-production: “On the set we try to do everything we can, we sow moments and then we go to the kitchen to find out what dish we are making. It can be very different when we are done cooking! We test the film and find out what people respond to, we remove jokes and moments. These kinds of movies take a year to finish,” explains Taika.

In this movie, Valkyrie is the queen of New Asgard and that means having to do a lot of things she doesn’t want to do, as Thompson confirms: “Valkyrie’s journey has been so much fun. We talked a lot about connecting her to her power and her trauma. She wanted to change the stereotype of a superhero, trying to take her spirit and her physicality but also allowing her to be fun and crazy. She has been a professional soldier for thousands of years and now she is stuck in the bureaucracy. He misses the battle and his sistersThat’s why she befriends Natalie.”

For her part, Natalie believes that her Thor is very different from what we are used to seeing: “She is still very new and tries to know how to do it. Furthermore, he is continually reverting to his human form, always sensing danger because any moment can be your last moment“.

And it is that not everything is going to be crazy comedy: in ‘Thor: love and thunder’ there is room for tragedy and sentimental scenes. “The beauty of these films is manage to give that space between the ridiculous and the funTaika knows how to do it very very well, in this particular film there is a lot of emotion in a very rich way for us. Topics such as love and relationships are coveredit’s very exciting,” says Tessa. Taika concludes:

It’s been a long journey and we’ve made something that we think people will love. We want to celebrate things like love, and thunder, whatever it means in your lives. We like to go back to the cinema and feel like children again.

the future of marvel

Since Kevin Feige is here, you have to ask him about the future of Marvel. First of all, the confirmation that he will be in the SDCC where we can expect big bombs at the level of 2019. “There will be news at Comic-Con and we will talk about the future, the first time for three years. Everything we announced has come out so we’ll talk about the future. We always plan five or ten years ahead, we are always thinking about what is to come“. Taika replies: “I always live in the present, two very different ways of being.”

Finally, the star question: Where is Thor going? Are there things left to tell about the character? Feige makes it very clear:

There’s a thing called comics, there are a lot of stories in there and that’s where our stories come from. If the question is “Have you told all the good Thor stories from the comics in the movies?”, the answer is no. There are many left. We want to continue with the character and this experience with Chris. Marvel actors can grow, and evolve, in the comics there are many incarnations of Thor that we have yet to see.

Man abandons the Ukrainian refugee after leaving her family for her: “I kicked her out of my house”

Amber Heard gets pissed off and reveals spoilers for Aquaman 2

the Minions and the long road to the final design that was born… in Barcelona!