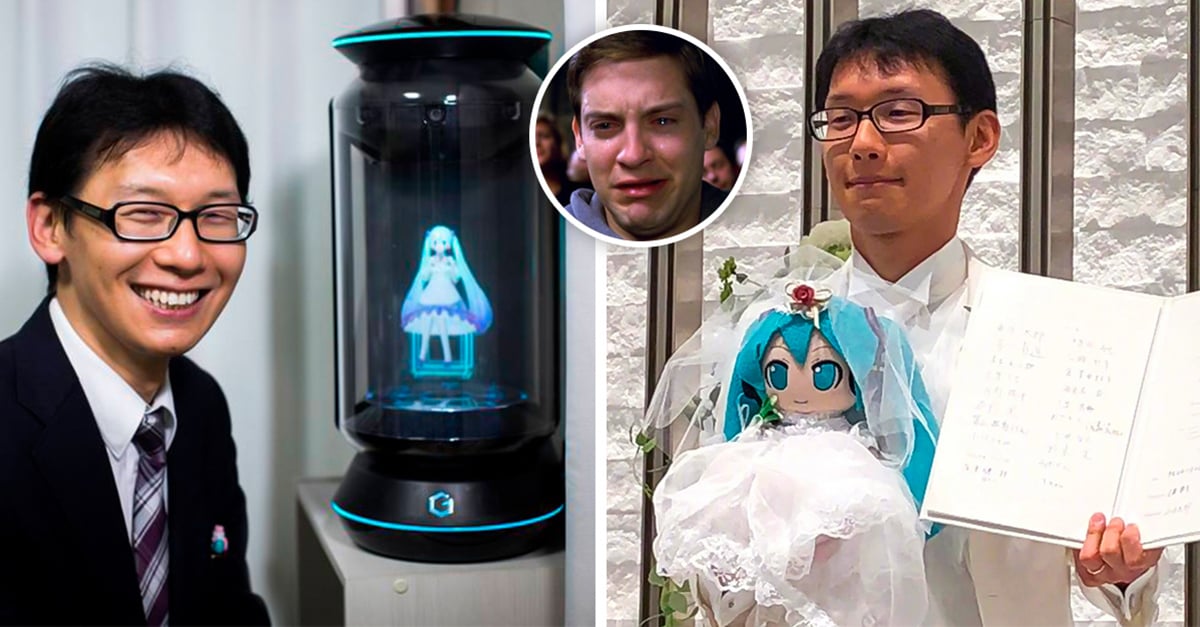 There are people who take their fanaticism for fictional characters to another level, to the point that they not only come to feel appreciation for them, but even tend to experience a kind of sexual attraction to creatures that do not exist in real life. As incredible as it may seem, the term for this condition exists and is known as fictosexuality.

The case of Akihiko Kondo became viral, because he not only fell in love with a hologram of the pop star Hatsune Miku, better known as the first Japanese virtual singer, but also married her a few years ago. However, he has now announced that he has trouble communicating with her due to her software expired.

It turns out that the boy from Japan became a trend in 2018 for celebrating his wedding with the female character like any other ceremony, in which he spent thousands of dollars for around 40 guests, which his family did not want to attend because they were opposed to the peculiar union.

Kondo appeared at the ceremony with a small stuffed figure of Miku, dressed in white to match his tuxedo. The marriage certificate was issued by Gatebox, the company that designed the hologram. Despite the fact that this document does not have any official validity, for the Japanese it was very important, since it is the paper that validates the union with his beloved pop star.

During all these years, the Japanese man has spent just over $15,900 on his wife’s upkeep, which consists of upgrading the software that gives voice to the three-dimensional hologram that is powered by artificial intelligence and that is inside a cylinder.

But like everything in life, nothing lasts forever and even though everything was perfect in Kondo and Hatsune’s married life, something recently completely changed his wife, because now he can’t even talk to her anymore because the license of software expired and the company officially canceled the service in March 2020.

After his hologram wife stopped receiving updates, the man was so affected by not being able to communicate with her that he fell into depression for several weeks and didn’t feel like doing anything.

I stayed in my room 24 hours a day and watched videos of Miku all the time. Her voice was what allowed me to return to work and regain my social life.

Given the sad event of Kondo, the Gatebox company has not published any statement in this regard, but everything seems to indicate that the service to update the software is canceled indefinitely.

For now, the Japanese man is waiting for technological advances to help him get his beloved wife back. For now, he bought a life-size Miku doll to keep him company and not miss the hologram so much.

Andrés García says that he can no longer walk and that it is difficult for him to get up from a chair: “Everything hurts”

Lady Di: This was what she told Camilla when she discovered Carlos’s infidelity

Barbie Ferreira announces her departure from the excellent HBO series