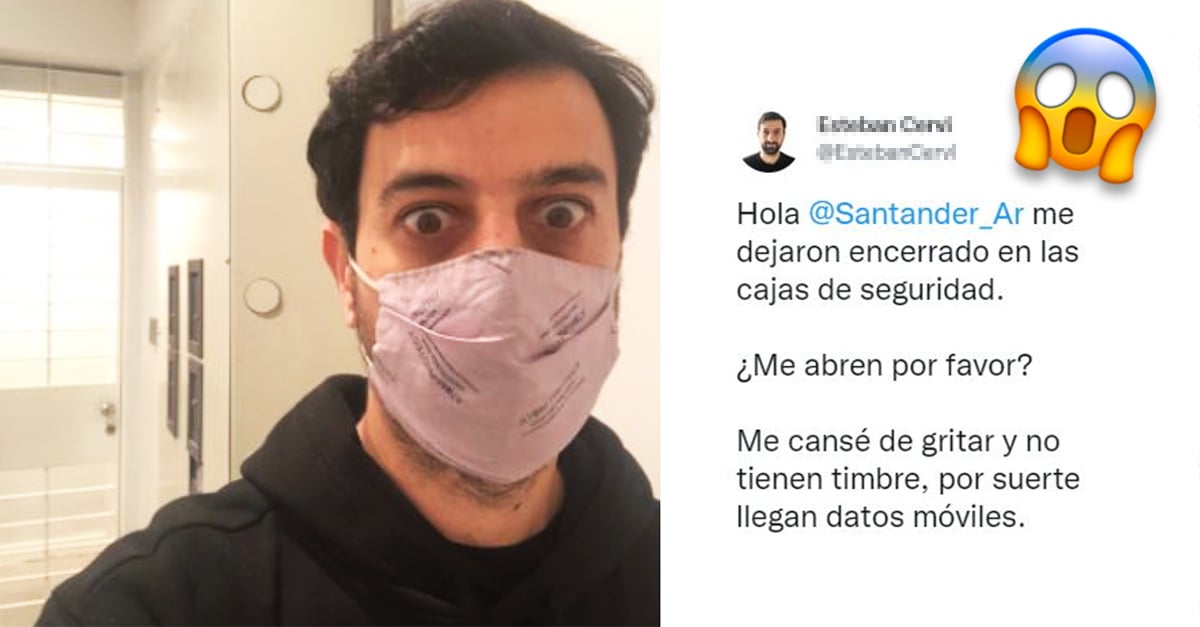 When we were children we imagined what would happen if, for some strange reason, we were locked in a supermarket, a department store or a toy store, even as adults we have come to think about it, but that never happens… or so we thought.

Although it seems like a joke, Esteban Cervi is proof that you can stay locked up in a space like this, specifically in a bank. Recently, the boy went viral on Twitter after he made a post asking for help getting him out of a bank branch.

Esteban was at the Santander bank branch in Argentina doing a paperwork in the safe deposit box area when he realized that a long time had passed and no one was opening the door for him. To his surprise, the branch was already closed.

According to Esteban in a Twitter thread, he called the police because the bank never answered his phone and neither did the messages on his social media account. Well, actually, the only ones who did heed his call were the bot who responded with: “We apologize for the inconvenience caused. We are already with you by private. We await your response.”

As if the story could not be more strange, Esteban also said that everything happened while he was visiting Argentina doing a series of procedures.

I went to close the account and get a watch that belonged to my old man who passed away suddenly in 2013. I don’t have a literal handle. All my wealth is in wines, books and a couple of ventures.

The last worker to leave never realized that Esteban was still there, so he set about closing everything as he normally would. Realizing his situation, the man started screaming, but no one was listening. Fortunately, he did get mobile data.

In the end, Esteban called 911, told them the whole situation, and the Argentine authorities arrived at the scene to get him out of there.

I was waving at the cameras, yelling, banging on doors, no one noticed. No one watches the security cameras or knows if there is movement.

After the fright and desperation, Esteban laughed at the whole situation and even had the luxury of putting together a survival kit in case someone else becomes trapped in a Santander branch, which, by the way, asked for an apology. and told him that they will reinforce the service process at the branch so that such incidents do not occur in the future.

The life of Kimberly Loaiza’s sister

so you can end this problem, according to experts

Carlos Calderón and Vanessa Lyon: After the scandal they are together again