Grandpa always waits for his great-granddaughter when he leaves school 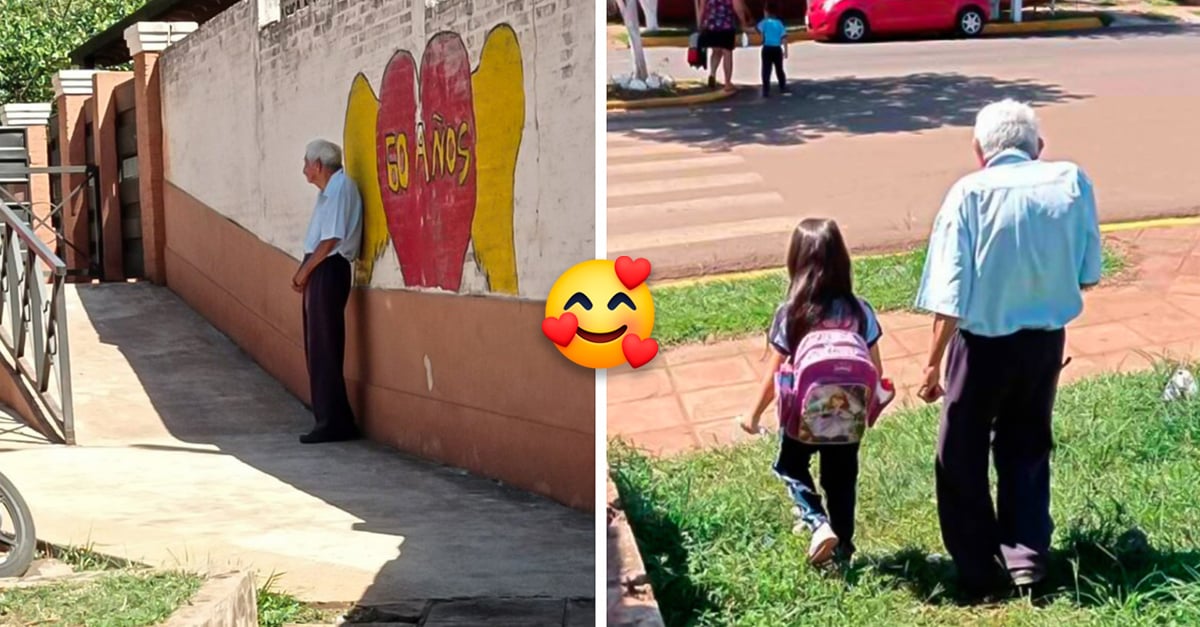 Undoubtedly, grandparents are sweet, loving, and lots of fun! They are like our parents but without that strict discipline. That is why the bond between grandchildren and grandparents is so magical, genuine and moving.

That is why we love the stories that show the great love of grandparents for their grandchildren, because it is enough to read them to enter the trunk of memories of our childhood and remember how good it made us to have them in our lives. Not for nothing did a Twitter post move thousands of Internet users by revealing the charming story of Don Eliodoro Maciel Centurión, a 91-year-old grandfather who adores his great-granddaughter so much that he doesn’t mind waiting for her every day after school.

Despite his advanced age, he does not hesitate to cross the city to take care of his great-granddaughter.

At the bottom of the publication, the user @ evelin03valenzu, who captured the tender and moving moment, recounted how Don Eliodoro waits for his granddaughter Genesis outside the school every day, always being the first to arrive. Grandpa waits patiently under the shadow of a wall to take her safely back home.

As expected, the scene of the charming grandfather outside the school touched the Internet users who came across it, so much so that the publication reached unimaginable proportions, since it already accumulates more than 30 thousand “likes”!

However, in the comments section, in addition to compliments for the gentle grandfather’s noble action, users could be read who began to speculate what could motivate him to “continue to fulfill certain obligations that did not need to be performed by him.”

Life has not been easy for Don Eliodoro

According to a report from The nation, “Lolo”, as he is affectionately called in his family, lives in the city of Encarnación, Paraguay and is very loved by the community. In fact, neighbors and acquaintances highlight his qualities by referring to him as “a very active, restless and full of vitality person” despite being over 90 years old.

Lorely, one of her great-granddaughters, said that Don Eliodoro has lived in her house for 22 years and, like her sister Genesis, he also used to pick her up after school. However, despite her great quality as a human being, her life has not been easy, as she has been clouded by tragedy and sadness on more than one occasion.

According to Lorely’s interview with the newspaper, Don Eliodoro had no family, since his wife had been murdered during an assault three years after they were married, so he went to live with one of his brothers, whose, unfortunately, he was the victim of. abuse.

Then Lorely’s mother, who is Don Eliodoro’s great-niece, invited him to live in her house, becoming the father he never had, as well as the happy grandfather of a little girl whom he loves to take care of, since he does not hesitate to cross the city ​​daily in order to keep it safe from all danger. What did you think of this beautiful story?

Kaley Cuoco happily announces that she is pregnant with a girl

Dua Lipa declares that she currently does not have a partner