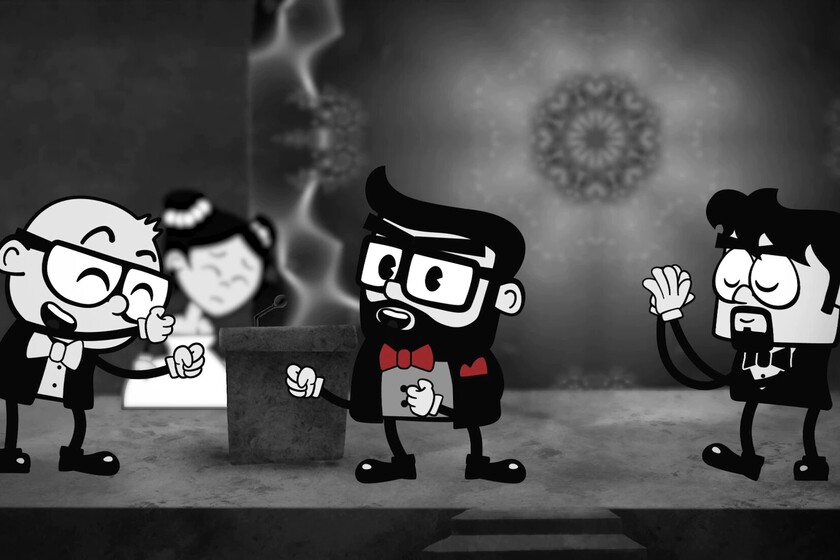 In the year 2020, only one film was nominated to the Goya for best animated film: it was ‘La gallina Turuleca’ that won the prize, twenty years after the last time there was an automatic winner in the category (‘Goomer’). In his house, a film director who had just released the remarkable (regardless of whom) ‘Secret Origins’, imagined the perfect move: easy, simple, nothing complicated, Automatic goya.

David Galán Galindo got together in times of pandemic with two friends, Pablo Vara and Esaú Dharma, to make the vaguest animated film possible but complying with all the rules and showing, incidentally, how lax the Academy is with animated films (or put another way: how little the category matters to it). The result is a film that is about, well, three directors who decide to make an animated film to win an automatic Goya entitled ‘Gora automatikoa’ (because, as they say themselves, Basque cinema is taking over a lot lately). More impossible goal.

There are two types of people: those who have read the previous paragraph and have rushed to see it on Filmin or Flixolé (very soon on Amazon Prime Video and Movistar+), and those who have decided to flee like the plague. They miss it: ‘Gora Automatikoa’ is one of the most blatantly clever movies of recent times, a kick to the conventions of the Goya and their ideas about what should be awarded or not and, incidentally, a reflection on art with free cock jokes. for just 71 minutesthe work breaks down the necessary requirements to be nominated in the most hilarious way possible.

Not only do they add 15 minutes of live action (allowed by the Academy), but on more than one occasion the characters say a “I can’t believe this counts as animation!”. Put mouths and arms on the photo of some pots and move them in the most crappy way possible? Animation. Repeat the same sequence up to three times? Animation. Everything counts, and in ‘Gora Automatikoa’ they are willing to go to the ultimate consequences to prove their thesis: the Goya for best animated film it’s a joke.

Well that will be your opinion

Knowing that they would not be able to count on the voice cast of ‘La gallina Turuleca’ (Eva Hache and José Mota), Galindo and his crew have launched themselves to the less mainstream audience possible: Twitter. And from there they have taken Elena de Lara, one of the best actresses to meet on the Spanish scene, and Andrés Trasado, the best film promoter in the country. In addition, Raúl Pérez, Pepe Macías, Frank T and Miguel Martín make their own cameos. The result is surprisingly heterogeneouswithout anything looking out of place.

In the end, it couldn’t be, by the way: ‘Gora Automatikoa’ predicted its own future, and lost to ‘Valentina’, who, as it turned out, was not clean wheat. Paraphrasing the film itself, “why do they happen to you? good things to bad people?”. In a category that traditionally has not received the attention it deserves, this warning and self-criticism from a normally immobile Academy, which seems to vote for this type of cinema, would have been perfect. based on the poster and synopsis.

Is everything perfect in ‘Gora Automatikoa’? Of course not. Sometimes it is repetitive and heavy, there is broad brush humor which becomes unpleasant, the main characters are not voice actors (and it shows)… But everything is part of the joke itself. Yes, of course this is a notoriously flawed film. It’s a prank a middle finger raised towards the industry, a totally independent work, a joke taken to the extreme. Coffee for the very coffee lovers.

An atypical promotion campaign, in which the characters commented on the rest of the nominated films and a premiere for the bajinis made ‘Gora Automatikoa’ happen unnoticed for most of your potential audience. Now, you have the opportunity to sink your teeth and give a few cents to three people who gave everything to try to commit the ultimate joke against the Goya: use the rules against you to win a statuette. For that alone, it’s worth a look.

‘Gora Automatikoa’ is a joke that uses the Academy’s own rules to make a film as vague and poor as possible and, despite everything, win a Goya in the absence of competition. There was a miscalculation, but it could have happened just fine. It is worth taking refuge for an hour and ten minutes in this story of spanish picaresque, broad brush humor, rap and metacinema. Highly recommended.

Stranger Things will have 2 episodes that will be movies