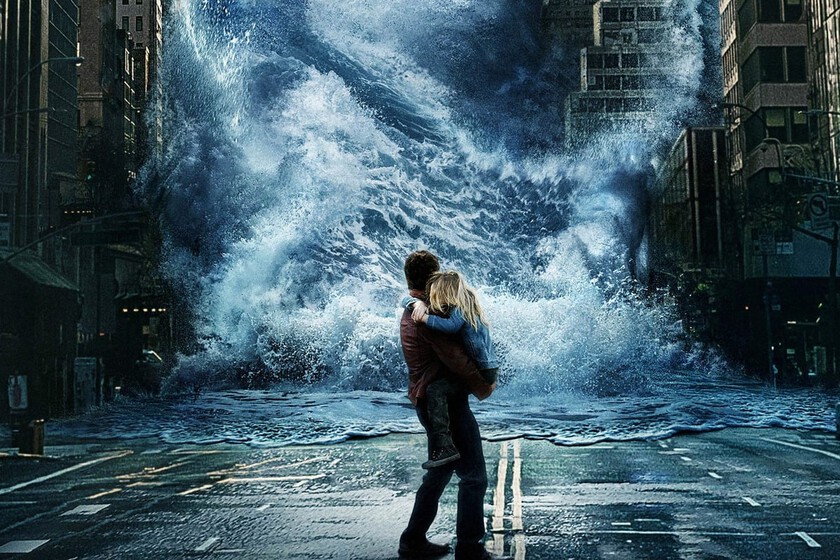 Year 2019. Climate change has killed many lives on Earth. In Madrid, without going any further, two million people died in one day. Not even freedom could save them. Luckily, all the countries of the world joined forces to create a space barrier that would prevent natural catastrophes, and, of course, it was led by an American. Now the barrier is failing again. This is ‘Geostorm’, an absolutely crazy movie of 2017 that has just arrived at HBO Max and that you cannot miss.

Singing under the rain

Behind ‘Geostorm’ is Dean Devlin, a name that may sound more familiar to you if I tell you that he is the screenwriter of ‘Independence Day’, ‘Godzilla’ or ‘Stargate’. He made a name for himself in the ’90s and isn’t about to get off that wave even well into the 21st century. And it is that this film is from only five years ago, but looks like it was made twenty-five years ago: The script is an unexpected nostalgia trip to the ways and means of a bygone era, for better and for worse.

‘Geostorm’ plays everything: the natural catastrophe, the action in space, the father-daughter drama, the unexpected betrayals. And it cannot be said that the puzzle works, but it is true that the succession of absurdities and nonsense it’s unbelievably fun. As soon as a tidal wave covers Dubai, the International Space Station enters a countdown to self-destruction, or a scientist inserts secret codes into a video that are absolutely impossible to crack. a delirium

If what you are looking for is seriousness, scientific coherence, well-developed characters and a story that criticizes the present in order to live better in the future, it may surprise you, but you won’t find it in ‘Geostorm’. In fact, it is possible that at a given moment you think that the plot was written by a thirteen year oldbut that’s just because that’s literally what happened.

When Dean Devlin was explaining to his daughter Hannah how climate change occurs, she asked him why couldn’t a machine be built to stop it. Any parent would write it on Twitter like “What’s wrong with my daughter” hoping for a viral tweet, but Devlin turned it into a film of more than 100 million dollars which, by the way, worked so poorly in the first few test runs that they had to reshoot scenes for another 15 wing millionaires with Jerry Bruckheimer supervising it.

This movie is pure fun for teenagers who no longer exist and that evades any kind of human responsibility in climate change in exchange for explosions, hurricanes and hundred-meter waves. If you’re willing to put your brain on hold and not considering what is happening (something for which, let’s not deny it, summer was created), you are facing a hilarious trip.

‘Geostorm’ is absolute nonsenseAnd I mean that in the most positive way possible. The ’24’-style twists (they even wade through one of the best known of the Jack Bauer series), the impossible action scenes, a voice-over that doesn’t come to mind at all… it’s as if the disaster movie of the 90s and early 00s will materialize again.

It’s not as spectacular as ‘The Day After Tomorrow’, nor as entertaining as ‘Armageddon’, but it’s well worth a couple of hours of your time in those moments when your brain asks you to see exactly the opposite of a brainy movie: it’s as fun and popcorn as it is forgettable and absurd. Sometimes we all need a ‘Geostorm’ in our life.

Tiktokers say that creating content exhausts them and gives them crisis

Collect 2 million signatures to get Amber out of ‘Aquaman 2’

Girl says she earns more as a domestic worker than litigating