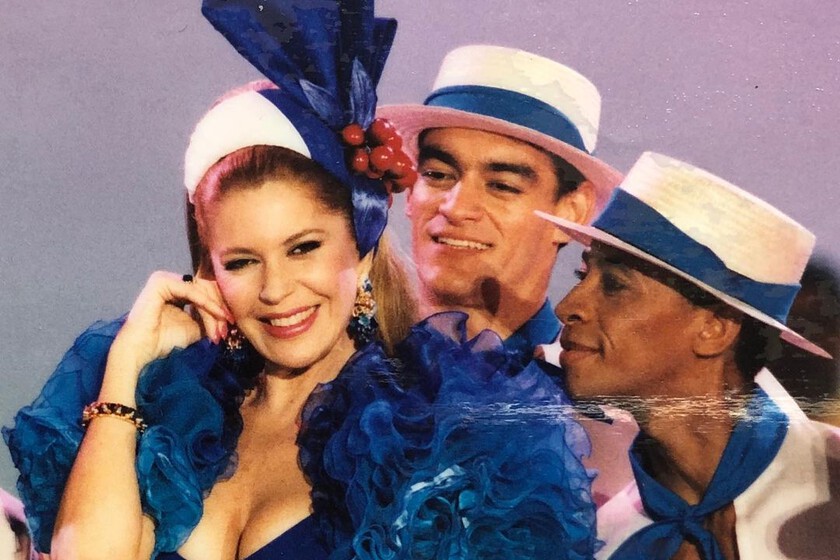 When the influencers were not even in the thoughts of the population, not even sticking their paws out on a paradisiacal beach to pose a little, the showgirls occupied that niche that is now occupied by the celebrities of social networks. And if today, just by saying instagramer María Pombo comes to mind, at that time the quintessential variety star was none other than the great Barbara Rey.

Sofía Cristo’s mother seems to be more current than ever after the premiere of the series ‘Christ and King’ on Atresplayer Premium. That is why we have not seen a better occasion to make this review for the love history of the Totana star (Murcia), a town that he leaves at the age of 18 to come to Madrid to earn a living as a go-go artist.


It was the year 1974 when the French actor recorded ‘El Zorro’ in our country. It was in Madrid when the 24-year-old fell madly infatuated with Bárbara Rey, that at that time she was single. However, he had already been with the actress Mireille Darc for seven years. Ten years later, Delon and Rey resumed their relationship.

“I like him a lot, of course, but he liked me more. He came to see me at the La Fontana theater and every time he came to Spain he called me. The number of messages he left me on the answering machine! He was mad at me” the vedette confessed in her day.

Another man who was unfaithful to his partner with Bárbara Rey was this FC Barcelona player. Bárbara and Carles met in 1977 when the vedette performed at the Victoria Theater with the magazine ‘Barcelona is Bárbara’. There they are carried away by passion until the television company realizes that she shared Rexach with Silvia Itoizwith whom he ends up marrying.

A short time later, Bárbara Rey meets Paquirri. The bullfighter was still married to Carmina Ordóñez, but that did not stop him from having this affair with Bárbara Rey: “I can adapt to living in a circus but I don’t see myself staying on a farm, that’s why we left it,” In her day, she recognized the muse of uncovering herself.

In 1969 Ángel Cristo was named the best tamer in the world and in 1980 he became the husband of one of the most desired women in our country. With the, Barbara has two children: Ángel Jr. and Sofía Cristo, known for her television appearances and her break into music as a DJ.

Although they seemed happy, the reality of the vedette is that she was a victim of gender violence practically from the beginning of her marriage. Punching, choking, drugs, alcoholism and lots of smacking On the part of the tamer, they were part of the daily life of the presenter, who hid the marks and always acted impeccably and without showing symptoms of being a victim of violence.

Barbara comes out of the nightmare of her life after leaving Ángel Cristo for Pedro Ruiz in 1989, as she herself confirms in a magazine. However, the man who marked her career and her life the most will soon arrive: the emeritus.

Forbidden love does not seem to be a taboo subject in the life of Bárbara Rey, few men seemed to be able to intimidate a star like her. However, her secrecy takes over her life by having an alleged prohibited relationship with the Emeritus between 1976 and 1994 after being presented by the president of the government Adolfo Suárez. This has been confirmed by journalists such as Pilar Eyre, who assure that their meetings took place in places such as the vedette’s chalet in Aravaca or in hotels belonging to the monarch’s friends.

In the HBO Max documentary ‘Save the King’, some audios and recordings were reproduced with which Bárbara Rey demonstrated her meetings with Juan Carlos I. In them, it was possible to appreciate how The monarch came to pay 600,000 euros so that the actress did not tell anything of his relationship with the manager.

The history of our country cannot be understood without the ‘Deluxe’ in which Bárbara Rey acknowledges having had a lesbian relationship with her friend, “the journalist”: “You and me, Chelo, and I love you, and I’m very sorry that I didn’t like women because I would have been much happier, we had a night of love“, he pronounced in his mythical speech.

In recent years it has been very difficult to see Bárbara Rey accompanied by famous men, which is why it was striking to witness her intermittent relationship with Bigote Arrocet between 2014 and 2019, becoming the first known couple in the piticlín after his famous break with María Teresa Camposalthough the thing did not prosper either.