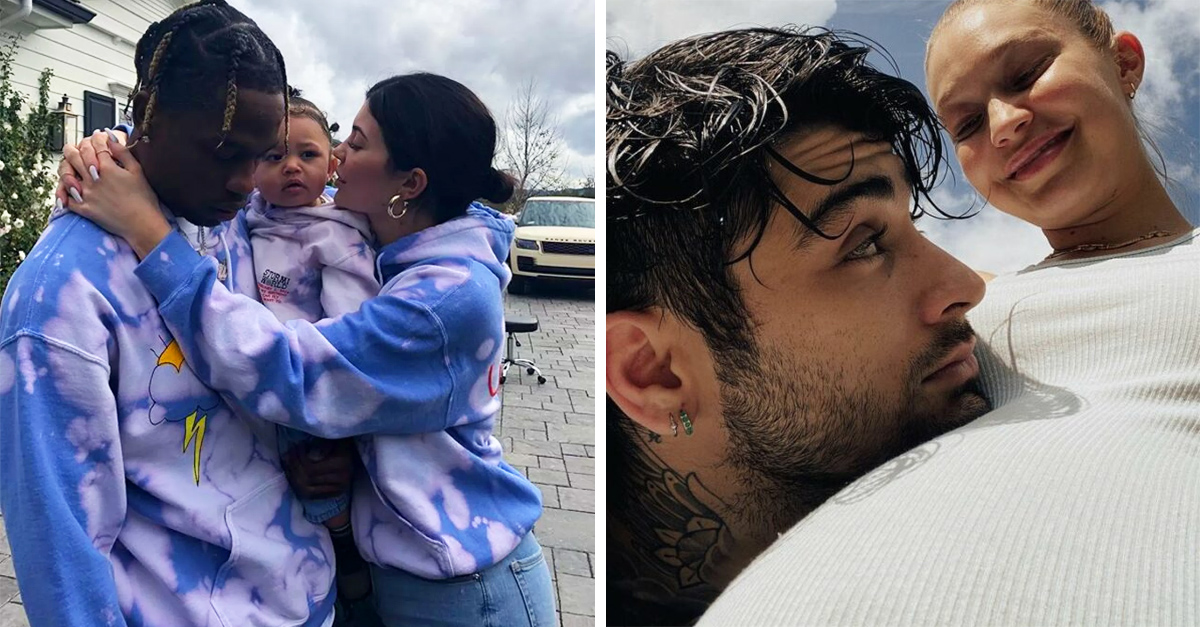 It is increasingly common to hear of couples who had children before marriage or even without ever getting married, and celebrities are no exception. In fact, it has become very common for the occasional celebrity couple to surprise us with the news that they will be parents, when we had not even assimilated the idea that they were together.

Love is not a science and does not come with written rules, and exactly the same thing happens with motherhood. From Adele and Simon Konecki to Tom Cruise and Katie Holmes, take a look at the celebrity couples who welcomed the stork before their first birthday together.

After years of friendship, Kim and Kanye started dating in April 2012. Eight months later, they broke the news that they would be blessed with the arrival of North West, who was born on June 15, 2013.

The couple met in 2005 and a few months later they surprised the world with the news that they were expecting their first child. The couple walked down the aisle six months before the arrival of Suri Cruise, who was born in April 2006.

Kate Hudson found out she was pregnant from Muse frontman Matt Bellamy after just two months of dating. They announced her engagement three months before the birth of her son, Bingham Hawn, but the couple broke up before reaching the altar.

Kylie Jenner and Travis Scott had only been dating for a few weeks when they found out that they would be parents to their daughter, Stormi Webster, in 2017. Although they separated for a while, love resurfaced and they recently welcomed their second child.

Gigi Hadid and Zayn Malik started dating in 2015, but they separated in 2018. In 2020, the couple gave each other a second chance at love and months later they announced that they would be parents. In September of that same year they welcomed a baby named Khai Hadid Malik.

Hilary and Matthew became a couple in 2017, but decided to end their relationship a few months later. However, they reconciled later that year, and in June 2018 they announced that they were expecting their first baby together. In October of that year, Banks Violet Bair was born, and in May 2021 the family grew again when their second baby, Mae James Bair, was born.

Adele confirmed the relationship with her ex-husband in January 2012 and gave birth to their first child, Angelo Adkins, in October of the same year.

Britney Spears and Kevin Federline married in September 2004, after only three months of dating. In 2005 they welcomed their first child, Sean Preston, four days before their first wedding anniversary. A year later, two days before her firstborn’s first birthday, her second child, Jayden, was born.

Olivia Munn and John Mulaney met in early 2021. However, their relationship was shrouded in controversy, because a week after the public announcement of the breakup between the comedian and his ex-wife, Anna Marie Tendler, the news broke that Mulaney had started dating the actress X Men, who was once considered a fan “obsessed” with the comedian. Less than two months later, Munn was confirmed to be pregnant. In November of that same year, the couple welcomed their first child, Malcolm.

Rob Kardashian and Blac Chyna got engaged after just ten weeks together! And a month later they broke the happy news that they were already expecting a baby. They were in a hurry!

Ángela, Leonardo, Majo and the way in which it has “weighed” on them to be grandchildren of Antonio Aguilar