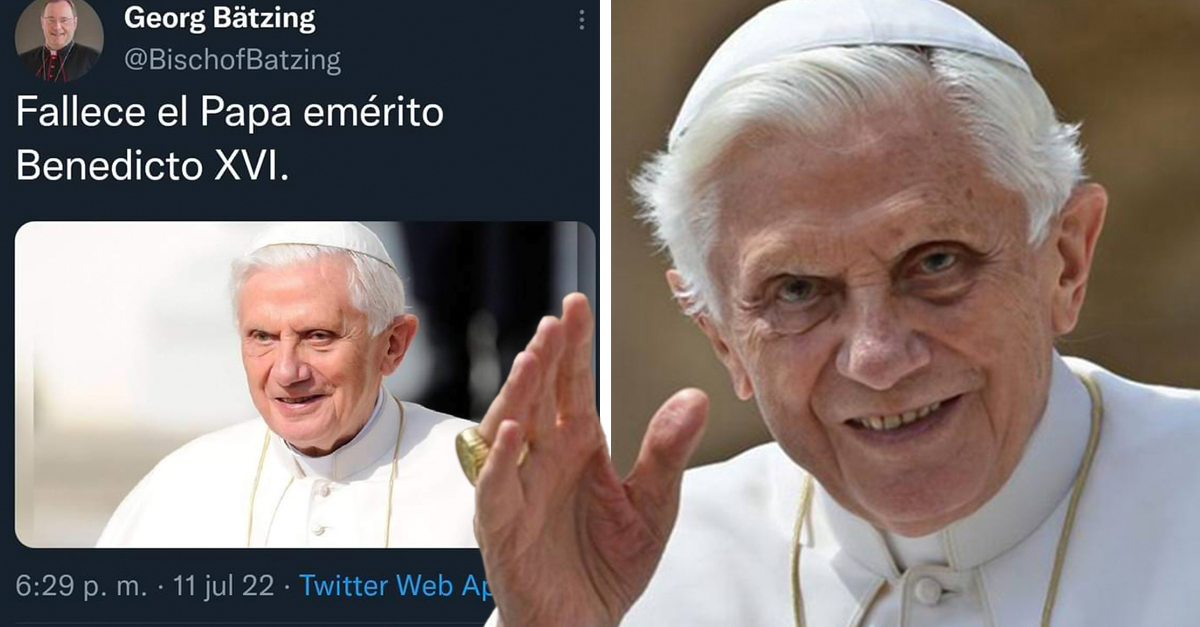 On July 11, a fake Twitter account identified by the name of Georg Bätzing, president of the German Bishops’ Conference, reported the death of Joseph Ratzinger, Pope Emeritus Benedict XVI, who led the Catholic Church from 2005 to 2013.

The deception about the alleged death of the 95-year-old ex-pontiff caused a stir. Various media outlets, mainly Spanish-speaking, reacted and spread the news, which was later revealed to be false.

Joshua McElwee, journalist for the National Catholic Reporterconfirmed that the claim of the death of Pope Emeritus Benedict XVI was “false” and that there were no indications to suggest that the Catholic Church was preparing an announcement.

About an hour after the tweet, the account attributed to Bätzing was deleted, but not before revealing that the announcement of the former bishop of Rome’s death was the work of infamous Italian inventor Tommaso Debenedetti, an Italian journalist known for regularly spreading false reports on Twitter. .

The cycle ends when the phrase appears on the accounts: “This account is a hoax created by Tommaso Debenedetti”. Debenedetti, a 53-year-old professor, had already reported the alleged death of Isabel Allende, Mario Vargas Llosa, Gabriel García Márquez, Fidel Castro, JK Rowling, Pedro Almodóvar, Martin Walser, among others. According to his own statements, his goal is “to show how easy it is to fool the press in the age of social media.”

In addition, according to EFE, Debenedetti is considered in Italy as a genius of the invention of interviews and assures that he takes identity theft and false letters “as a game” and that he does it with the sole purpose of “having fun”.

In an interview with The country In 2010, Debenedetti confessed that “he likes to be the Italian champion of lies” by inventing interviews with “the greats”, such as the Dalai Lama, Mikhail Gorbachev, Noam Chomsky or Joseph Ratzinger himself.

These were the first reactions to Black Panther: Wakanda Forever

Geraldine Bazán surprises fans by looking identical to her eldest daughter: “Mother and daughter or sisters?”