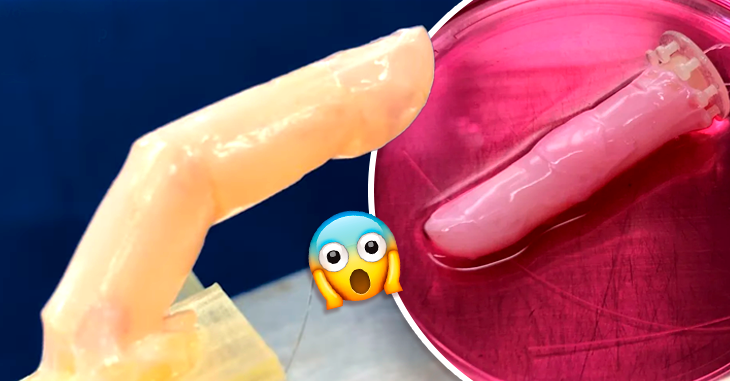 Scientists at the University of Tokyo in Japan have created a robotic finger covered in living skin, in what they say could be a major step toward creating genuinely human-like robots. Like real human skin, the lab-created coating repels water, wrinkles when the robotic finger bends, and even has the ability to heal itself.

The study, which was published in the journal Matter on June 9, 2022, explained the process of how scientists got skin to grow on a robotic basis. Professor Shoji Takeuch, one of the lead authors of the study, and his colleagues immersed the robotic finger in a cylinder containing a solution of collagen and human dermal fibroblasts, the two main components that make up the skin’s connective tissues, for three days.

These cells make up 90 percent of the skin’s outermost layer, giving the robot a similar texture to human skin as well as barrier properties to retain moisture. Both components adhered to the finger and formed a dermis-like layer, 1.5 millimeters thick, that could bend, stretch and hold its shape like a normal finger.

According to the study, the skin can even heal itself if it is damaged with the help of a collagen bandage, which gradually transforms into skin and withstands repeated joint movements, as long as it is in liquid, since the developed skin is much weaker than the real thing and cannot survive long without blood vessels to replenish it with moisture.

However, Takeuch says that in the future it will be possible to incorporate artificial blood vessels into the skin to keep it hydrated, as well as sensory neurons, sweat glands, hair follicles and nails to make it more realistic.

I believe that living skin is the ultimate solution to give robots the look and feel of living beings, as it is the exact same material that covers the bodies of animals.

Although he also maintains that while he and his team are aware that this field of research has the potential to build a new relationship between humans and robots, the risks and benefits of making them too realistic should be carefully considered.

This is the cream that Rosalía uses to hydrate, give shine and softness to her skin (and which is sold in Spain for less than 19 euros).

Young man organizes living funeral to say goodbye to everyone

Britney Spears causes controversy for her behavior in a restaurant

Angry from a Warner screenwriter because of The Batman