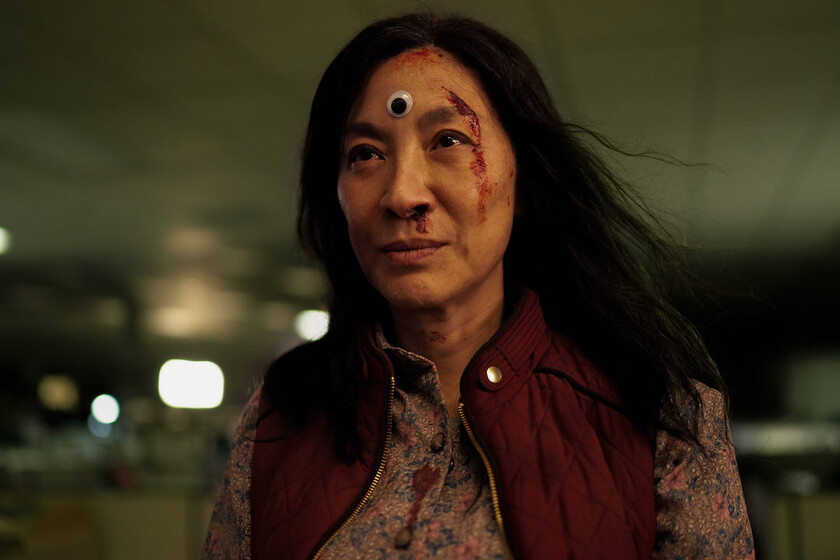 Imagine you are a Marvel or DC producer in a year when multiverses have become fashionable. You will prepare your movie full of cameos. You even have the audacity to call Sam Raimi and title it “the multiverse of madness.” And then the directors of that movie where Daniel Radcliffe was dead and farting released the most epic, funny, emotional, unpredictable and fantastic possible. And to top it off, it has the best possible title: ‘Everything, at the same time, everywhere’.

The Daniels knew very well what they were doing. ‘Swiss Army Man’, a movie very easy to reduce to absurdity, attracted by its bizarre proposal but captivated by the emotional plane, his particular sense of humor and fabulous characters. In ‘Everything, at the same time, everywhere’ they double the play with a film as old-fashioned and atypical as it is innovative and perfect.

viewers every time we are more intelligent and savvy. We know how to guess the plot twists and even guess the final shot from the beginning. And the movies know it, but they do little to challenge us as viewers: they are aware that, many times, the risk is equivalent to a bad box office or too extreme reviews at a time when we have become accustomed to well chewed cinema. ‘Everything, at once, everywhere’ is a breath of fresh air in a quagmirea film that reminds us of the power of surprise, discovering a film as it happens, letting yourself be carried away by your own world where you never know what will happen next.

If the movie showed all its cards from the first minute, it probably wouldn’t be as shocking. But instead he prefers to start in the most calm and routine way possible, as if it were an indie slice of life: a family drowning in debt must get their taxes cleared. The gateway to madness opens little by little, slowly, but when it opens completely, it is impossible not to enjoy a proposal that is capable of something that is not usually seen: mixing genres (action, comedy, drama, science fiction…) in perfect proportion. Nothing is left over and nothing is missing. His existence is a great little miracle.

‘Everything, at once, everywhere’ dynamites your expectations and blows them up. It shows very complex concepts to understand but, without the need for unnecessary over-explanation, easily making everything flow. It’s an imaginative wonder with scenes where you won’t stop wondering how they dared go this far. In his two hours and twenty minutes he has time to touch on absurd humor, martial arts, existentialism and science fiction without resentful at any time.

One might believe that this explosive cocktail is going to lose its flavor at some point, but it is such a well-measured work that it knows when it is time to add a new surprise ingredient: the Daniels treat viewers like smart people. It is not a film designed with algorithms or with the famous (and false) “average viewer” in mind, it does not try to please all demographic spectrums or worry that there are “too dumb” or “too complex” parts. As the cinema should be… And as we have become accustomed to it not being.

‘Everything, at the same time, everywhere’ would not work if it were a simple succession of very crazy scenarios and impossible situations. Her emotional core is what makes her the contemporary wonder that she is. A nucleus based on family, yes, but also on self-discovery, in finding love where it seems impossible, in a giant bagel as a metaphor for life. What makes this movie great is that behind the laughs and adventure there is something that other movies forget: soul.

Now, with the arrival at Movistar Plus+ of ‘Everything, at the same time, everywhere’, those who missed it in the cinema (big mistake) will be able to enjoy it for the first time. And it is that no matter what you’ve been told about her– There are so many details, incredible shots, action sequences and unique moments that you have never seen before on a screen that you will be glued to it. How long has it been since a movie really surprised you?

that the film was the biggest hit in A24 history it supersedes many theories that some studios have about the movies that people want to see. No meaningless action, no scantily clad young people, no shoehorned jokes every half minute, no dramas that try to force a tear: what the public wants is a good script, a good staginga film from which you leave fully satisfied, with your head running at a thousand miles an hour.

This movie is at the same time pure 2022 and cinema completely removed from the style that the majors are launching this year. She’s smart, idiotic, serious, hilarious, sentimental, routine, fantastic, complex, simple, simple, complex: she’s done it. That’s it. At once. Everywhere.

Doctor Strange 2: It is confirmed that Charles Xavier is the same as the X-Men of 1992

Marvel: Genre of the 8 Disney Plus series