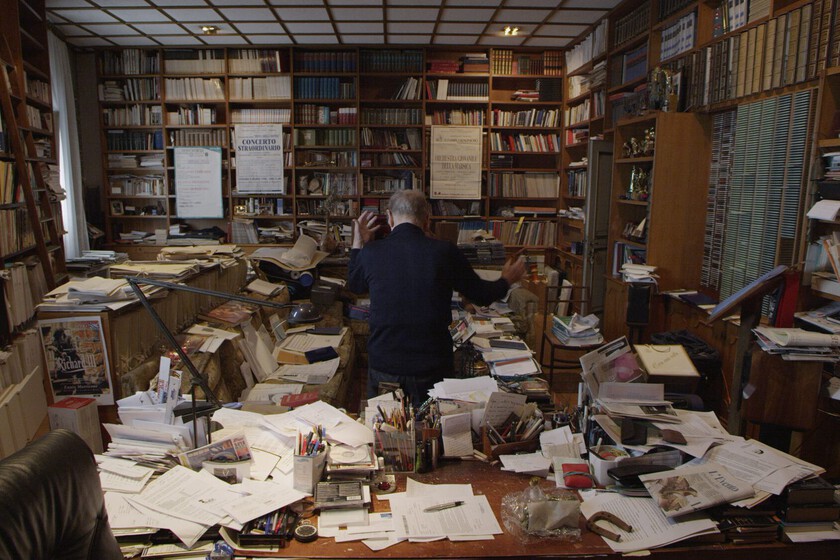 It all starts with the sound of a metronome. We are located in his house, specifically in his office, that place where so many wonders have been created. And suddenly, she appears and we accompany him while he performs his flexibility exercises. She is 90 years old but the agility of his movements and the brightness in his eyes make him look much younger.

Once the routine is over, he gets up and happily begins to move his arms to conduct a non-existent orchestra, while we listen to his beautiful main theme for ‘La Herencia Ferramonti’. Nice to meet you, teacher Ennio Morricone.

Having a documentary like ‘Ennio, el maestro’ is, without wishing to exaggerate, a miracle. After the brilliant book of interviews written by Alessandro De Rosa and published in 2016, it seemed that we were no longer going to learn more about the figure of the enormous composer. He finally he has been the good one Giuseppe Tornatorewho has achieved the feat of carrying out his most personal project: discovering who Ennio Morricone is.

Narrated in chronological order, we witness the composer’s professional career: his beginnings as a trumpeter with his father Mario Morricone, his educational stage with Professor Goffredo Petrassi, his first steps as an arranger for RCA, the reason for the improvisation group Nuova Consonance and above all, his work for the cinema. Film sequences, archive images and multiple interviews with colleagues and professional friends accompany Morricone as he addresses, not only to our ears, but also to our eyes.

And so magic arises: the artist hums, laughs, remembers and gets emotional. We had never seen Ennio, an artist so reserved and critical of his own work (he was never satisfied with his celebrated work for Sergio Leone’s Dollars trilogy) so human, close and simple as until now. Through his testimony we understand why he dedicates himself to composing for the cinema and despite his success, the enormous contradiction that it supposes.

It is beautiful and even poetic that Tornatore was in charge of carrying out this project. Morricone has worked on more than 500 projects with a huge number of directors and although he has repeated with most of them, we can say that one of the most important relationships is the one that arises thanks to ‘Cinema Paradiso’. Since then, the director has not lacked in counting on his most important collaborator and his filmography has been key in the last stage of the composerwhere we can find famous scores such as ‘The Legend of the Pianist in the Ocean’ (Golden Globe winner), ‘Malèna’ (Oscar candidate) or ‘La Correspondencia’, the latest soundtrack composed for cinema by the Roman.

Due to its long duration (a total of 156 minutes) and the large number of titles to highlight, the rhythm ends up being somewhat uneven. There is nothing to object to the extraordinary editing of the film, the rhythm with which it begins and is maintained for more than half is stupendous.

But when you get to ‘Once upon a time in America’ and ‘The Mission’ (perhaps the two most important works of his entire career), he gives the feeling that he wants to tell everything that remains in an accelerated way, avoiding talking about a large part of its American production in the 80s and 90s, and with special emphasis on the Oscars, something that is even annoying because, despite the Huge skid of the Academy not awarding ‘The Mission’ To the detriment of Herbie Hancock and his ‘Around Midnight’, other international competitions did award his work (for example, the BAFTAs recognized him each and every one of the six times he was a candidate, a fact that is not mentioned).

It is strange that a documentary film is made about a composer of film music and even more so that it manages to be released on screens. Until now the only reference was ‘Music for the Movies: Bernard Herrmann’ released in 1992 and nominated for an Oscar. However, this documentary could be said to be of a quite different nature since the greatest of the many merits of ‘Ennio, el maestro’ is that we have the direct and close-up testimony of the composer in a state of grace. It could be said that more than a documentary about Ennio Morricone, it is about a movie starring himself.

It must be said that Ennio Morricone has always been, together with Vangelis, John Williams and Hans Zimmer (the last two appear in the footage), the most popular soundtrack composer of all time. And I don’t know exactly if it was as a result of his work in the spaghetti westerns or because of the Mediterranean coincidence, but in Spain he has always been greatly loved and respected (the Spanish poster for ‘Mayo de 1940’ announces his name in capital letters on the subtitle, I have never before seen a poster selling the film by its composer).

I would like to add that although awards often mean very little, the David di Donatellos celebrated ‘Ennio, el maestro’ with 3 awards, and I am proud that they had the courage to recognize a documentary film with nominations for best direction and film of the year .

Ennio Morricone was born on November 10, 1928 and passed away on July 6, 2020, which means that sadly, he did not see this work in his lifetime. The artist who always wanted to leave the cinema but that the cinema itself never let him go, not only is he still alive in his scores, now also with this documentary. It has been a pleasure meeting you, Master.

The secrets of María Pedraza’s make-up at the Venice Film Festival, a hair treatment, top beauty launches and other signings