Dwayne Johnson surprises his mom and gives her a new house 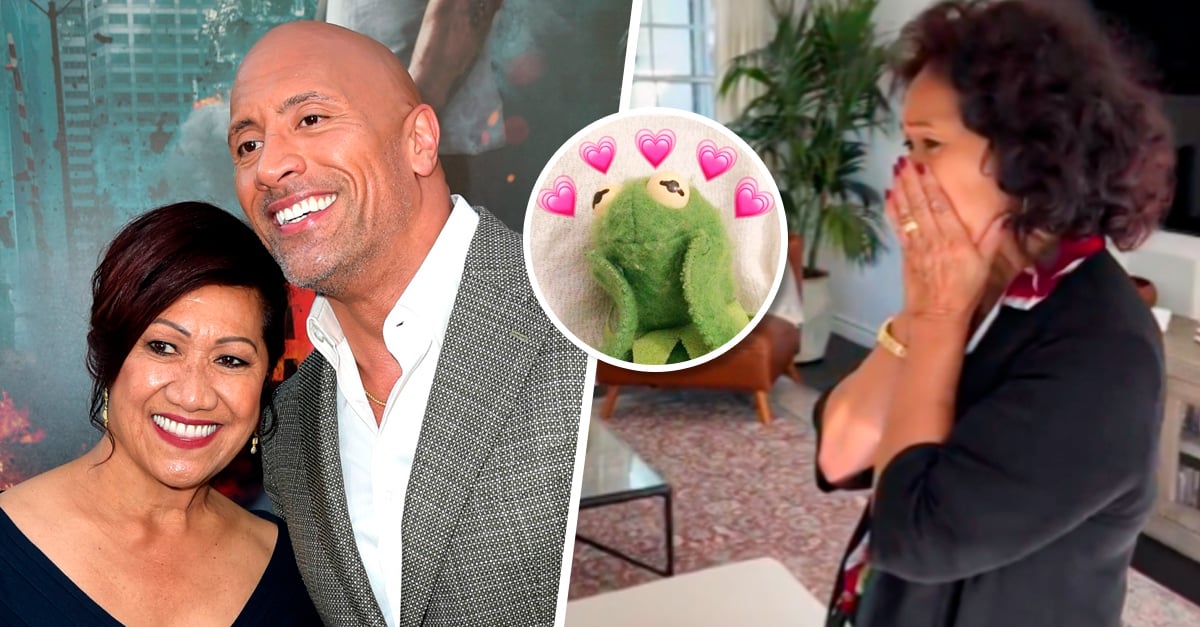 The love and gratitude of a child to a mother is eternal, so it will never be enough to pay for all the effort and sacrifice they made to get them ahead. However, there are always children who are looking for ways to surprise and give them things that have sentimental value rather than economic importance.

Just like the famous actor Dwayne “The Rock” Johnson did, who on June 5 surprised his mother, giving her a new house with personalized decoration with items of great sentimental value for her, which moved her to tears.

Through a couple of videos shared on his official Instagram account, “The Rock” showed the emotional moment in which he took his mother, Ata Johnson, to what will be his new home, where the former fighter decided to personalize with some details that her mom loves them.

The beautiful gesture of the actor began with a recording in which, with the background song Over-the-Rainbow by Israel Kamakawiwo’ole, you can see the former wrestler’s mother outside a house. She then knocks on the door to then enter and, surprised by the decoration and the photographs in the room, she cannot contain her emotion and cries with happiness.

This is the expression of the mother of @TheRock seeing your new family room. His ukulele collection hangs on the wall, as well as photos of his Samoan heritage. pic.twitter.com/puH3sJCLT3

I took my mom to her new family room where we hung her ‘vintage’ ukuleles on the wall and was able to dig up pictures of our ancestors she hasn’t seen since she was a little girl growing up in Samoa.

He misses his mother and his father. I miss them too.

Thank God for blessing me with a bit of a work ethic to make things like this happen.

Get out the ukulele and let’s go.

In a second video, “La Roca” is heard welcoming his mother, who, upon entering the family room, cannot help but be moved to see a wall full of her collection of old ukuleles, as well as photographs of her ancestors, which the woman has not seen since she was a child.

There is nothing better in the world than seeing mom’s smile. @TheRock He remodeled his mother’s house and this is his reaction to seeing her. pic.twitter.com/QfRnHAiJ2r

Introducing my mom to her new ‘Smackdown Room’. In his house he always has his ‘Smackdown Room’ where he keeps the coolest Rock/DJ memorabilia, but over the years they’ve gotten insanely crowded – so for his new house I had these cool add-ons made and just added a few few memorabilia items – Posters, University of Miami game balls, movie awards, championship titles, etc. I thought I could add whatever I wanted from here.

In another video of the walk through her new house, Ata also discovered that she has a room full of memories of “The Rock” and DJ, called the “Smackdown Room”, which is full of posters and prizes that he has left. Wrestling.

Dwayne Johnson assured that these types of Smackdown rooms generate a positive energy in him, since every time he stands in front of those awards and championships it serves as a reminder to never forget where he comes from.

Emphasizing that there is nothing more beautiful than making parents happy, Johnson assured that as a child he did not like to see his mother cry, but this time they were tears of joy. On more than one occasion, his mother said that after a lifetime of traveling, she wanted that house to be her last, because it was her dream come true.

It should be noted that this is not the first time that “La Roca” surprises her mother by giving her a house, since in December 2018, she shared a video in which Ata is reading a Christmas card, in which she reveals her gift.