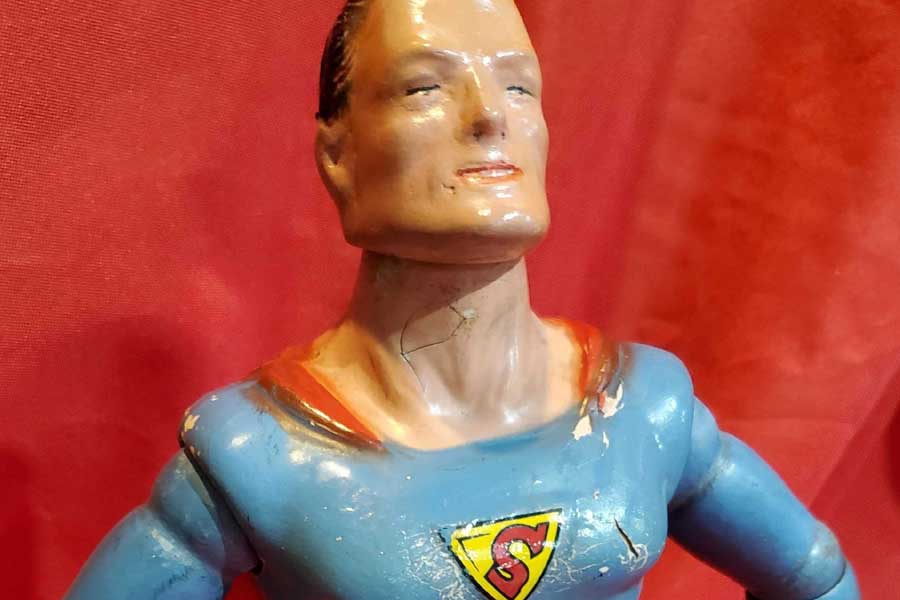 If you are a fan of DC Comics, knowing that Superman was the first superhero with an action figure will fascinate you.

In the world of superheroes, Superman pioneered many aspects of pop culture, from being the first superhero, the first to appear in multiple titles, and even the first to own an action figure.

Do not stop reading: The first actor who gave life to Superman

As you probably know, an “action figure” is a figure of a character usually molded in plastic and with points of articulation. Historically, it was a term coined by Hasbro in 1964 to market a GI Joe figure, as their competition called them “dolls for boys.”

However, jointed dolls and dolls have been known for at least a couple of centuries. And while it’s taken as official that DC’s first line of action figures is considered to be the 1971 Mego, it was in 1940 that the world saw the first articulated Superman figure.

Do not stop reading: Smallville’s easter eggs and their deep respect for the Superman mythology

According to Go Back to the Past, in 1940 the success of the character (whose debut was just two years earlier in 1938 and a year later he got his solo title) took him to the radio with The Adventures of Superman, to have a special Christmas, the one shot called Superman’s Christmas Adventure, and a toy produced by Ideal Toys.

“The first Superman toy to go into mass production was a 12-inch wooden doll with sixteen points of articulation. It came with a fabric cape and a lacquer finish to keep it looking good while the kids blew it around the backyard. Considering that the term ‘action figure’ would not be coined until a quarter of a century later, it was not marketed as such at the time. However, just look at it and try to tell us that it doesn’t look like an action figure! Go ahead, we challenge you. A strong argument can be made that he is the first superhero action figure ever made, even if it wasn’t called that when he was new.”

Sources: CBR.com and Go Back to the Past

The history of the Man of Steel awaits you in our online store with:

ACTION COMICS #1 brought Superman into the world, sparking the idea of ​​the superhero in many ways, and creating the comic book industry as we know it. Join us in celebrating ACTION COMICS’ incredible 80-year history, featuring classic stories, including the first appearances of SUPERMAN • SUPERGIRL • BRAINIAC • HUMANTARGET • ZATARA • THE FORTRESS OF SOLITUDE • WATCHMAN

…and even a special appearance by John F. Kennedy!

First trailer for the Watchmen series, will it replace GOT?

HBO confirms that Arya Stark will not have her own series

How to watch movies online for free