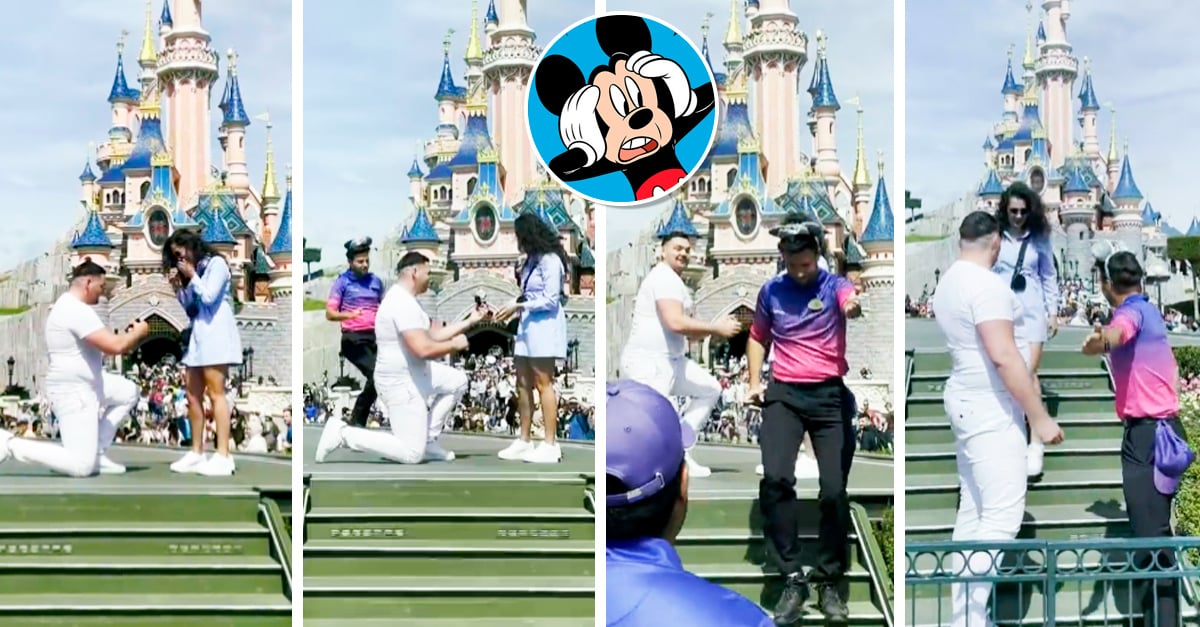 Disneyland is known as “the happiest place in the world”, so it’s easy to take in the fact that it’s one of the perfect settings for marriage proposals. Truth be told, proposals at Disneyland or any other Disney park are so common and frequent that there is a dedicated page for “happily ever after” planning.

However, not all experiences are as magical as they should be. Such is the case of a couple whose marriage proposal at Disneyland Paris was ruined by a worker there, who officially became the Internet’s greatest villain.

The unfortunate event was recorded in a video that went viral, unleashing thousands of negative reactions, forcing Disney to apologize for the unpleasant behavior of its worker.

It all started when the pair of lovers shared one of the most important moments of their lives, on a stage in front of the beautiful castle of Sleeping Beauty. In the video we can see a man, dressed in white, who kneels and shows a ring to his partner while applause and celebrations are heard in the background.

Just seconds later, however, the bliss is interrupted by a worker wearing Mickey Mouse ears running onto the stage and snatching the ring from the man who is still kneeling. He then runs down the stairs, motioning for the couple to get off the stage. Visibly shocked and speechless, they both follow directions.

Viewers seem confused by the scene, with some even booing the employee who interrupted the couple’s happy time. Another worker, slightly out of frame, signals for the bride and groom to obey the order of his companion.

Worker: Yeah, that’s great. But here it will be even better.

The video was originally posted by Reddit user u/rwasgehtlan, who claims to be friends with the man in the video. According to his testimony, what the Disney employee did not know was that the man had obtained permission from the park to carry out the marriage proposal.

Such was the outrage that the awkward scene of the worker interrupting the marriage proposal generated that a Disneyland spokesman told Newsweek that the park offered an apology to the couple:

We are sorry for how the situation was handled. We have apologized to the couple involved and offered to correct it.

However, the debate on social networks continued. According to users of social networks, the employee’s action was correct, since, apparently, the couple jumped the stage fence. Even so, there are those who agree that the subject should have waited for the proposal to end.

To be fair, is that an off-limits area that they had to jump the short fence you see?

If you wait until the people who jumped the fence finish the marriage proposal in a setting they shouldn’t be in, everyone watching this video will think they can do the same.

But why? If it is more than evident that those two jumped the carca, breaking the laws of the place. Laws are respected no matter what.

The truth is that they had to let the proposal end. It’s common sense.

Kim Kardashian opens up about her marriage to Kanye West