Discover the easter eggs and references inside Thor: Love and Thunder! 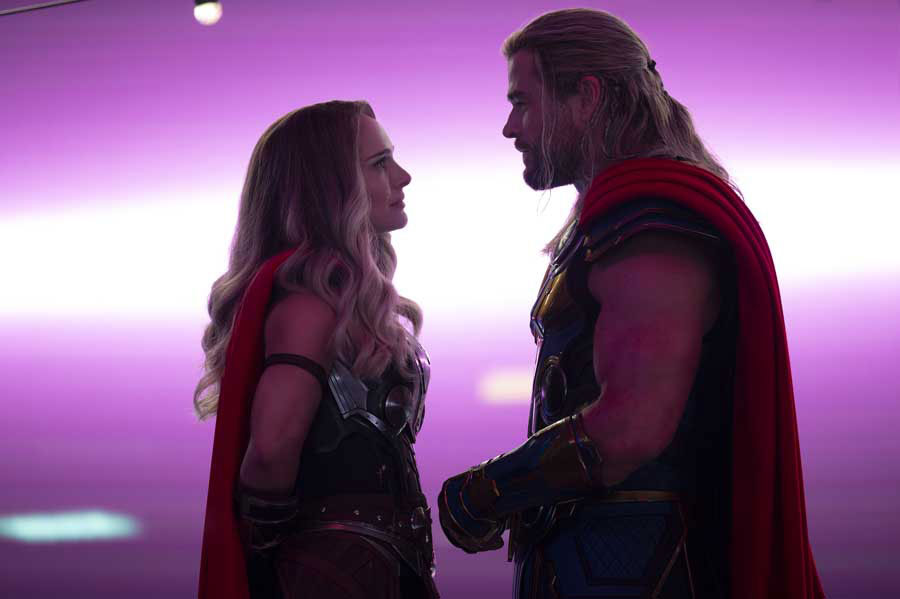 The references and the easter eggs within Thor: Love and Thunder could not be missing, so we compiled the winks in the new Marvel Studios movie

Do not miss: How many post-credit scenes does Thor: Love and Thunder have?

Thor: Love and Thunder has hit the big screen, and the new film directed by New Zealand filmmaker Taika Waititi not only brings us a feature film with a balance between comedy, drama, action, adventure and irreverence, the easter eggs could not be missing.

Without further presentation in between, meet the easter eggs of Thor: Love and Thunder.

The beginning of the film introduces us to Gorr, a believer in the Gods, who asks the deities to intercede for his daughter who has not tasted food or water in days. Disappointed by the gods’ overbearing attitude, Gorr uses the necrosword to start the god slaughter.

Although it is not the All Black sword (related to the Klyntar and Venom) the origin of Gorr is respected as we saw in 2012, at the beginning of Jason Aaron’s career with the God of Thunder

We saw it in the first trailer and we finally got a quick look at the teenage version of Thor, who wears the classic costume we know him from the comics.

Korg’s account of the legends of Thor, Thor and Jane’s relationship, as well as other stories that Thor’s ally tells the children of New Asgard, and the general audience, features many scenes from the films.

Asgardians of the Galaxy

After the events of Avengers: Endgame, Thor joined Peter Quill’s team to continue his work as protector of the nine kingdoms, and the chemistry with the Guardians of the Galaxy is so good that even Thor names the group The Asgardians of the Galaxy. Galaxy.

This team reminds us of the heroes who over 10 issues filled the gap left by the Guardians of the Galaxy, who had parted ways

After the first moments of action in the film, we return to earth, where a frontal battle breaks out in an office in the United States where the renowned astrophysicist Jane Foster is undergoing chemotherapy treatment.

This moment takes us back to The Mighty Thor #1 (2015) where Jane Foster begins to receive quinios for breast cancer that is in an advanced stage.

While Foster is undergoing his chemotherapy treatment, another patient is reading one of the astrophysics books, which talks about wormholes and Einstein Rosen bridges.

Foster takes as an example two films, Event Horizon and Interstellar, a film directed by Christopher Nolan, who worked with Christian Bale on the trilogy of a Man Bat, as well as in The Big Trick.

On the scene appears Dr. Darcy Lewis, who was Foster’s assistant in the investigation of the events in New Mexico, in Thor’s first time on earth, as well as in the events of Greenwich.

After investigating the events at Westview (WandaVision) Darcy returns to support his mentor and friend, who likely guided him to get to the bottom of the Hex matter.

Another old MCU acquaintance who makes a brief appearance is Erik Selving, who is also trying to help Jane Foster with her health problem, but the cancer has advanced to complicated stages.

As we saw in Avengers: Endgame, the surviving Asgardians took refuge in a region of Norway where they settled in a town they called New Asgard.

After more than five years of existence, New Asgard has become a tourist destination that would envy places like Disney.

Possible insult to the victims of Thanos? One of the stores that opened in New Asgard is an ice cream parlor, which is called Infinty Cones.

This place has the typography of the Avengers tapes, and its logo is a Gauntlet holding an ice cream cone.

As we mentioned before, among the Asgardian survivors is the theater company, which has already adapted the events of Thor: Ragnarok on stage, in a play that is the delight of tourists to New Asgard.

War of the Realms

As SMASH anticipated since Thor’s fourth film was announced, Jane Foster traveled to New Asgard, where she found the remains of Mjolnir, which “came back to life” to be wielded by the astrophysicist, who has become in Mighty Thor.

While Taika Waititi’s film is inspired by Jason Aaron’s arc (The Mighty Thor), the restoration of Mjolnir was inspired by War of the Realms, where Jane Foster becomes Valkyrie.

While the events of Civil War were happening, Marvel Studios released a couple of shorts titled Team Darryl, where Thor shares an apartment with a man named Darryl.

The surprise was the appearance of Darryl, who has moved to New Asgard to be part of the Valkyrie Queen’s team.

Details of Jane and Thor’s relationship are given in the Korg stories, and the God of Thunder never abandoned his duties as protector of the earth, to the extent of being requested by Nick Fury, whom Thor has recorded on his cell phone. as Nick Furry (Nick Furry)

City of the Gods

One of the important scenes in the film is the journey of Thor, Jane Foster, Valkyrie and Korg to Omnipotence City, to convince the Gods to join their fight against Gorr.

In this court of the gods Thor and his team meet deities such as Quetzalcoatl, Bast, Kronan (the God of the Korg) and even the God of Dumplings

As SMASH reported when the second trailer for Thor: Love and Thunder came out, the God of Thunder got a series of tattoos on his back to remember his brother Loki, whom he saw die at the hands of Thanos, in one of the poignant easter eggs from the movie

We do not want to imagine the courage that Thor will do when he finds out that a variant of Loki from 2012 began to unleash chaos in the Multiverse. Will the brothers meet again?

After Thor’s team gets the lightning bolt from Zeus, they again board the boat pulled by Toothgnasher and Toothgrinder, to set out in search of Gorr.

In the escape from Omnipotence City, the presence of two Celestials, the superior beings who were responsible for the creation of the Eternals, is seen.

When the boat that arrives in the kingdom of shadows crashes on the moon, the scene reminds us of the classic Trip to the Moon, a film that dates back to 1902, with one of the first special effects on montage

Not only was Eternity the only cosmic entity we saw on stage in Thor: Love and Thunder, as other powerful beings were present on the tape.

The Living Tribunal, Uatu the Watcher and Lady Death also appear in one of the important scenes of this film.

After Gorr gains access to Eternity’s location, Jane Foster, evidently exhausted from using her strength against Gorr, ends up succumbing, but not before promising that Thor will take care of Gorr’s daughter,

Jane Foster dies and this event reminds us of Mighty Thor #705, where Foster also dies in Thor’s arms.

A souvenir to your memory

To recognize the bravery, the claw and the fight of Jane Foster as Mighty Thor, in New Asgard a statue is erected in his honor, an easter egg that takes us to the tome The Mighty Thor at the gates of Valhalla.

This volume works as an epilogue to The Mighty Thor arc with Jane Foster, in one of the most moving easter eggs of Thor: Love and Thunder.

For her sacrifice, Jane makes it to Valhalla, where she is greeted by Heimdall, who shows his appreciation to Jane for taking care of their son Axl.

This entrance is known in the comics, when Jane herself takes her place in the paradise of the Vikings and the Asgardians, in the last of the easter eggs in Thor: Love and Thunder.

Do not miss: What is Marvel Studios preparing after the premiere of Thor: Love and Thunder?

“Indiana Jones, King Kong and Journey to the Center of the Earth are some of the references of Mundo Extraño”. Don Hall, director of the new Disney movie

Discover the cameos that Guardians of the Galaxy Holiday Special had