Critique of The United States of Captain America #5 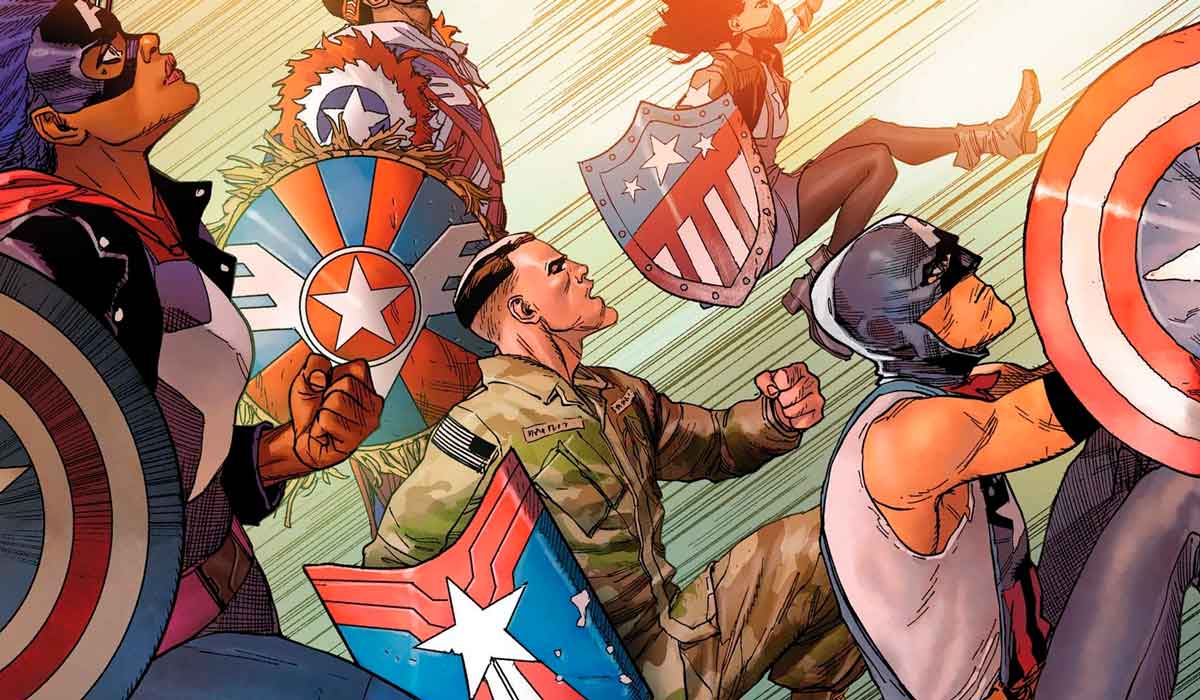 Final episode of the miniseries The United States of Captain America, has led Steve Rogers, and the rest of the characters who have ever worn the shield and the uniform in any of its variants, to face the Hater and his minions. Panini Comics retrieve the shield to place it in the showcase it deserves.

The black soul of a dictator

We can debate for hours about the worst rulers who subjected their nations to an absolute and dictatorial power that ended with greater or worse fortune. From ancient kings to perfidious characters who only sought their greatest personal glory, enrichment and wasted vanity, there are many names that come to mind. But out of a huge list there are some names that would appear on almost all the lists, one of them being the one that would most agree with the general population, that of Adolf Hitler.

His is the basis for the creation of the Hater, a clone created in his day by Arnim Zola, at the dawn of the German defeat in World War II, to which the Fuhrer’s consciousness was transferred so that he could continue with his plans, with hatred as his greatest weapon. Since then, he has become, above all, one of the most dangerous enemies that the Fantastic Four have faced since his first appearance in number #21 of the quartet, even causing the transformation of Susan Richards into Malice during the well-remembered stage. by John Byrne.

Objects that become emblems of a nation

Again, the authors of this comic leave us brief historical gems that are worth inspecting, albeit quickly. The exhibition for which Captain America’s shield was to be donated, which was stolen at the beginning of the plot that surrounds us, includes pieces as interesting as the Queensboro counter, Abraham Lincoln’s hat, Rosa Parks’ homemade dress, the Harvey Milk’s megaphone… It is worth recreating these episodes in the history of the United States because they all speak of the struggle for the rights inherent to the human condition, regardless of race or sexual condition.

In reality, that’s what all this about The United States of Captain America has been about, about diversity, about accepting everyone as they are without losing their identity. Of respect for everything and everyone, of a matter of education that does not make us better for having a skin color or for shaking hands with someone of our same sex while we take an affable walk. We all have a place in this world that is increasingly given to visceral criticism and confrontation over sibylline ideas, orchestrated by people outside the street, who seek to impose trends of opinion as if we ourselves were not capable of realizing how beautiful it is. it is sharing our lives with others and not having to justify whether we are believers, have a certain sexual condition or defend freedom as one more member of the Captain America network.

the road to glory

Reading multiple media helps to open your mind and that includes comics too. The undersigned is equally lost in the pages of Marvel as in his history books of all times, in digital news papers and gossip magazines, among the works of Michael Moorcock, Brandon Sanderson or Robin Hoob. Christopher Cantwell must also have his readings but he is in love with good work through his scripts and he is surprising us very positively not only in this miniseries that has not only taken us through various places in the United States but at the same time it has helped us to understand that we have much more in common than what we disagree about.

His career in the world of comics is being a shock at the moment and not only has he been able to offer us an exceptional Doctor Death alongside Salvador Larroca, but his work is destined to shine with its own light. Personally I do not intend to lose sight of him and, although there are many colors for tastes, I hope that the next artist who embellishes his texts will enrich him even more because Dale Eaglesham, without being a bad illustrator, has not been up to the level he deserved a gathering of Captains America as inclusive as this one.

The United States of Captain America 5 of 5

Title: : The United States of Captain America 5 of 5

Description : After the shield thief unleashes a deadly villain, Bucky teams up with a military officer to capture the villain, while John, Sam and Steve continue the chase. All the Captains America come together in the final battle of this groundbreaking miniseries.

Critique of Maigret. His best weapon is knowing how to listen

BTS ready to sing in Spanish and conquer Latin America

Marvel confirms the next thing we will see from America Chavez