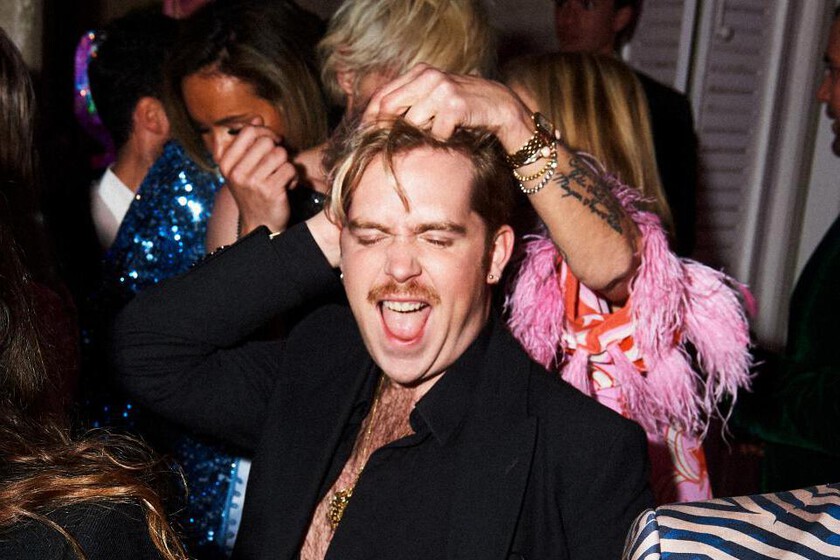 Netflix must think that in Spain we get very bored because it is not the first Spanish reality show that brings us about people with pasta “enjoying their free time”. We are going to review the most past moments of the thread of ‘First Class’, the surreality generator of memes heir to ‘I am Georgina’.

Mom, I want to be an artist

One of the most remarkable specimens of the reality show is Aldo, who introduces himself as “a Renaissance man in Postmodernity”. Your hobbies? “Take care” of his farm, parachute and paint pictures… peculiar. He presents his work to us in the first chapter, to convince us that art gives meaning to his life: “Perhaps I was a painter in another life” (yes, darling, because in this one I tell you no).

In an ideal world, in which ‘First class’ was only fiction, Álex would be the wasted secondary of the story. Archie’s assistant has to put up with constant ignoring by his boss, who seems to have found in him a good punching bag with which to get even. “Alex as an assistant is a zero” is the nicest thing he says about him in the whole program: disaster, horror, he smells bad, he’s a slut… with friends like that.

not without my surgeon

This little group of hedonists love surgery and it is a recurring theme. We don’t know whether to stay with the “tit talk” (“I’m all natural except for my boobs” begins Zaida. “One of my boobs turned around, of course, with so much yoga” Clara replied) or the hair implant (“I got hair because I had a helipad for up here” said Álex).

Without a doubt, the star moment would be Clara’s presentation: “I have no defects, except for Botox”, just after clarifying that he never laughs so he doesn’t get wrinkles.

Reaffirming that the great discovery of this reality show is Clara, because she herself puts many of the memes into eggs. “I look like Candy Candy” she comments on the dress she has chosen to visit Aldo’s farm. “It’s my first time so close to an animal. It smells weird” she says, looking at the cow that grazes next to her. “Me here with my Gucci raffling little shit” remember just before we see that it doesn’t fit through the chicken coop door.

The farm chapter is a gold mine but we will only highlight two more moments: the tremendous disappointment that ends up being Aldo’s paella (“It was inedible”, “It’s all Joan Escribà’s fault” Aldo points out to the master rice cooker who has only smelled above) and the debate on art in which everyone is baited with Zaida for saying that his friend’s painting would not match his sofa: “She’s ignorant” says Lucía bluntly.

From the beginning, Clara insists that her dream is to be an actress and her friends get her an audition with a famous theater director. As soon as it starts, the man is already checkered when she takes his “children” out of his little bag (a few little dolls creepies who collects) and puts them to make it public.

But his face of circumstances is even more evident after Clara sings ‘Lo forbidden’ to him and repeats the monologue of ‘Gone with the wind’. “Since Scarlet was a woman, I thought about playing a woman,” she explains.

You have to see how rich people are, who can’t even stand a dinner without making their own. Because it doesn’t matter that her friend Julie has conscientiously prepared a charity gala, they only worry that they have been separated at the table and they start to change the names of places. “Imagine that I am with someone I don’t know at all. It is very stressful to think about topics of conversation.”

They haven’t been hesitant about expressing distaste for the evening and They haven’t been long enough to fall asleep on top of the plate: “It’s that charity galas seem boring to me, and if they’re for women, even more so,” Clara emphasizes.

One of the people who messes it up the most is the tarot reader, who deals the cards a few times because they didn’t like the result. She predicts to Clara that she will marry her partner but there will be a second man in her life, an option that initially horrifies her. “But… do you have money? That’s what matters to me”.

While he talks to Amanda about an envious woman who will boycott her from the shadows and everyone thinks that it is Carola, his ex-girlfriend who is also in the group. “How am I going to be me? With everything I’ve done for her,” the aforementioned complains about her. “I only block her on mobile from time to time.”

What is your trade?

Few things are more surreal than the ending. Without going into details, the little group of hedonists ends the same way it started and launches its message to the world, the reason for the existence of this program: “What does it matter what people think? Doing what you want is the real luxury”. Come on, what at the time was “the rich also cry” has now become “how are they going to cry if they can dry their tears with 500 euro bills?”. Instructive, yes, sir.

Cameron Diaz Says She Doesn’t Care About Her Appearance