BTS gives speech at the White House, this is all they said 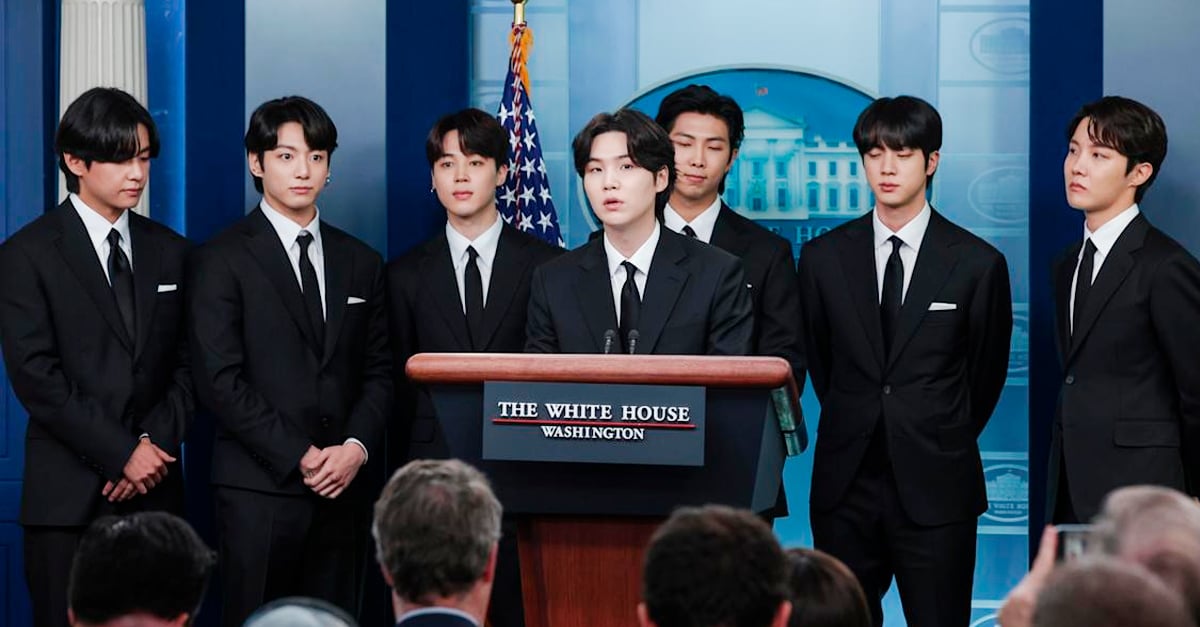 The members of the successful BTS group met with US President Joe Biden on Tuesday to conclude the Asian-American Heritage Month events at the White House, where the ARMY approached with the illusion of seeing their South Korean idols. .

The seven members of BTS and President Biden entered the Oval Office of the White House to deliver a brief statement about hate crimes against the Asian community in the United States and speak out for diversity.

The meeting between the gang k pop and the president of the United States was held in private. However, the members of BTS appeared at a press conference officiated by Karine Jean-Pierre, a spokeswoman for the White House. Kim Namjoon (RM), leader of the group, began the speech speaking in English, while the rest of the members spoke in his native language.

Hello, we are BTS! It is a great honor to be invited to the White House to discuss such important issues as anti-Asian hate crimes, inclusion and diversity. We thank President Biden and the White House for giving us this important opportunity to talk about important causes and for reminding us what we can do as artists.

Today is the last day of Asian American Heritage Month. We join the White House in supporting the community and celebrating.

We were devastated by the recent increase in hate crimes, including Asian-American hate crimes. To stop this and support the cause, we would like to take this opportunity to express ourselves once again.

We are here today, thanks to our ARMY: our ‘fans’ around the world who have different nationalities, cultures and languages. We are truly grateful.

It still amazes us that music created by South Korean artists reaches so many people around the world, transcending language and cultural barriers. We believe that music will always be an amazing and wonderful unifying tool for all things.

It’s okay to be different. Quality begins when we open up and accept our differences.

Each one has their own story. We hope that today is a step forward to begin to respect and understand each and every one as a valuable person.

The band did not respond to any questions posed by reporters, although some were shouted out anyway, including, “When are you going to have a world tour?”, to which RM and Jin responded with a smile.

Before one of the most watched press conferences of the Biden Administration, the group shot a video with the president of the United States. The bonus content was released by both BTS and the White House on Tuesday night, along with a photo of the South Korean band and Biden making finger hearts.

We want to say thank you, sincerely, for your decision to enact the Covid-19 Hate Crimes Act. We just want to be a little help. We really appreciate that both the White House and the administration are looking for solutions.

Referring to May as Asian American and Pacific Islander Heritage Month in the United States, President Biden said:

This is an important month in the United States. Many of our Asian-American friends have been subjected to real discrimination. Hate just hides. When good people talk about it and say how bad it is, this one goes down. […] People really care what you say and what you are doing is good for all people. It is not only their great talent, but the message they convey, that is what matters.

The reactions of his faithful followers, commonly called BTS ARMY, were immediate on Twitter, where in addition to showing their admiration, they praised the great work of the group:

I am a woman in her 50s whose life was literally saved by the positivity, inclusivity, and hope for a better life that these seven guys are spreading around the world. Openly, they address the issues that no one wants to touch. Negativity only strengthens your resolve to push your message further.

Many people found hope seeing BTS when they were about to end their lives and felt like it was the end of the world, the only inspiration for them was BTS. They are the voice of many people who cannot speak for themselves. They have done so much for humanity, even more than all of us.

They have really impacted and influenced many people with their words and messages. They campaign and write songs on topics like self-love, mental health awareness, dream pursuits, inclusion, and being an advocate for others in the world.