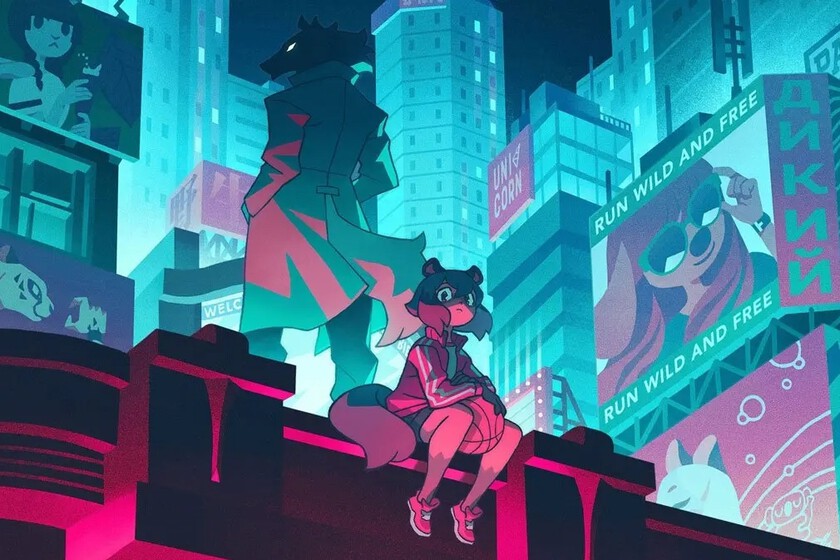 Comparisons are odious, and more so when the premieres almost overlap. It seems that ‘Zootopia’ brought us back to the mainstream stories with anthropomorphic animals only for ‘Beastars’ to become one of the series of the moment a couple of years later.

‘BNA: Brand New Animal’ It is the second series Yoh Yoshinari directs for the study after ‘Little Witch Academia’, and this time he dared with a completely different approach. ‘BNA’ transports us to Anima Citya seemingly utopian city where animans can live in peace.

These beings are a type of humanoids with animal features that are persecuted by humans, and Michiru Kagemori she has finally arrived in the city trying to find shelter… The problem is that Michiru had always been 100% until she mysteriously became a tanuki. Arriving in the city, she meets Shirou Ogamia wolf who hates humans but decides to help her adjust to her new life.

Little by little, Michiru begins to know more about the animan society and learn about the inhabitants of the city, although she soon finds herself involved in a political conspiracy that is a little big for her.

One of the most fascinating aspects of ‘BNA’ is precisely Anima City and all the lore behind the animans and their world, and the series is responsible for unraveling it little by little and in the right doses. The anime consists of only 12 episodes that are very easily seen in one go and at all times it maintains a very good rhythm, which balances the calmest and most comical moments with the most raw.

Because although the style can be a bit confusing between so many cute animals and pastel colors, ‘BNA’ has its good doses of gore and explicit violence, making it clear that everything is not as beautiful as it seems in Anima City. Because in the midst of baseball games and music videos we get together with mafias that control the game, animal violence and terrorist groups, among other things… So beware, it’s not exactly an anime for children.

If there is something to be blamed for it, it is that sometimes it tries to cover too much, mixing political conspiracies with police plots, slice of life, criticism of racism and religious activism… all in a very short time with which they often bite more than they what should The plots sometimes suffer from being too predictable, but the characters keep you hooked and it is a very dynamic anime that is worth watching until the end.

The plot works, but you stay for the animation

Despite the fact that Studio Trigger has a relatively young age as an anime studio, it has already left us quite a few bombshells and has established itself with a very characteristic style that we have already been able to see in the spectacular ‘promere’ and in two of the shorts from the first season of ‘Star Wars: Visions’.

So already with this file, the expectations for the animation of ‘BNA’ are very high and they do not disappoint. Undoubtedly, the visual section is the strong point of the anime series, and it is very nice to see series so recent that they still risk doing certain things completely in traditional animation without resorting to CGI.

Crazy camera turns, extreme transformations, a touch of more “vintage” anime and beautiful color palettes (with the pastel tones that are already characteristic of the studio) that give a lot of personality to the series. If it weren’t for its spectacular graphic section, including the character designs, ‘BNA’ would be a bit deflated at times, but It is a series that is worth watching just because it does not have an ugly frame.

Again Netflix approves comfortably in the dubbing section and once again has a team that is glad to hear in Spanish, both for the quality of the dubbing actors and for the location. Although if you are one of those who prefer to watch anime in the original version, rest assured that it is also available in Japanese with subtitles.

For now there are no plans for a second season of ‘BNA: Brand New Animal’, and it is almost to be thanked. Be careful, that would also be welcome, because although history leaves us with many possibilities ahead, It is a series that works perfectly with a contained plot that tells us what it has to tell us satisfactorily, and the rest depends on what we want to imagine.

Fulfills promise and asks girlfriend to marry after winning Argentina

what a pharmacist thinks about the latest TikTok craze

Grimes is shown with his face bandaged; his fans wonder if he has to do with his desire to get “elf ears”

All the nominees for the Grammys Awards this 2023

the actress who is revealed with ‘The spirits of the island’

‘Nightmare in paradise’ opens with a program that intends to be a rural ‘Save me’ between horses, pigs and celebrities