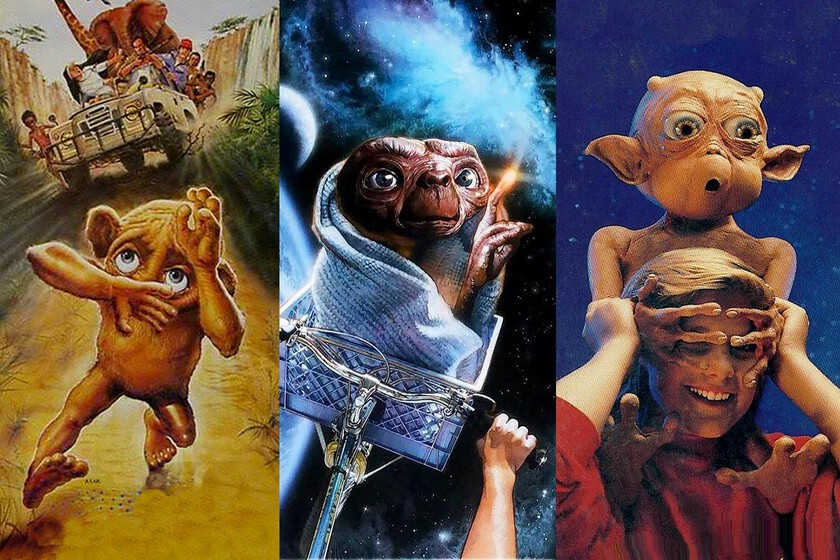 ‘ET, the extraterrestrial’ (ET: Extraterrestrial, 1982) celebrates 40 years defining much of the style of fantastic cinema signed for the current big screen, in part because the imprint of its director, Steven Spielberg, is still valid both as author and producer, and the legacy of the little brown alien remains, and plays remember that its success created a whole avalanche of cheap imitations.

Although his influence can be seen in films like ‘Short Circuit’ (1986), ‘Purple People Eater’ (1988), ‘The Iron Giant’ (1999) or ‘Lilo & Stitch’ (2002), what matters to us now they are their direct scruffy cousins. We must thank a great team of unashamed producers, writers and directors without whom we would not have been able to enjoy these thirteen samples of spiritual misery. A selection of substitutes for everything to a hundred of the adorable alien designed by Carlo Rambaldi. A dirty trip to challenge your mental health, laugh and cry.

Translated something like ‘The golden pencil and the mischievous alien boy’, this Korean anime is one of the most unusual proposals within the ET exploits that was directed by the mysterious Young-su Lee, whose only work is this. A pen-shaped ship, a heroic ET and adventures in space, it may be the most different from Spielberg’s of those present, in fact it was released in Korea before the film. If anyone wants to see it, it’s all on youtube.

The king of the Spanish B (and Z) series Juan Piquer Simón was an expert in making exploits with an international vocation. So much so that many of his works have a true worldwide cult following. The new Aliens is no exception and the adventures of Trompi, the alien that eats peanuts, It was included in the 100 worst movies of all time on the imdb page.. They wanted to plagiarize ‘Alien’ and, seeing the success of ET, they included the entire plot with a child, leaving a strange hybrid with terror that was somewhat outdated.

The ET of the Calatrava brothers. How, that name does not tell you anything? Imagine a couple of comedians who join the subtlety of the Morancos, the reinvention capacity of José Mota or the ingenuity of Barragán. In addition to singing, they were very given to parody films like ‘Scary movies’ and our little alien could not be missing from his collection. To carry out the grotesque, the ugly brother of the couple babbles wrapped in a condom suit, although more than resembling ET, he resembles a teletubbie with cerebral palsy.

With all of you: Moguito.** The Argentine ET, an extraterrestrial being that helps you flirt**. He is not as ugly as others in this selection but he also has a serious problem with botox. In ‘The Extraterrestrials’ there are also facsimiles of emblematic moments of Spielberg’s, such as the bicycle flight, which here is replaced by a car that does not start. The lucky ones, in this film directed by the expert in exploits Enrique Carreras, were the pair of comedians in fashion in Argentina, Olmedo and Porcel. Another ideal duo to investigate advanced methods in Guantánamo.

Korea’s second copy of ET, another anime full of fantasy plots, twists and turns that pairs children with a prince among the ET who takes them to his beleaguered planet to meet his family and get into mischief with dangerous villains, with some ideas that would later coincide with Joe Dante’s ‘Explorers’, but this time with an alien design much more similar to Rambaldi’s, molds were also taken of the key characters of the children and even the scene of the bicycle is recreated in a little less than traced way.

The other Turkish ET. Perhaps it is the remake or the second part of Badi, it is not too clear. Someone thought that justice had not been done with the first adaptation and tried to create an even more painful experience. This time the film tries to be ‘funny’. Homoti is as if Carmen Lomana had gone overboard with plastic surgery and he would have gone a couple of phases further than good old Mickey Rourke. He has a Kim Kardashian ass and he dares to see ‘Jaws’, as a tribute.

Do you remember when you asked the kings for a cool doll and they brought you one with a similar name but much more seedy (and cheaper)? I guess the director of this movie thought she might still make a few bucks when someone mistook her for ET at the video store. The only difference is the sponsorship of Coca Cola (the alien is addicted) and McDonalds in the movie. There is a terrifying dance sequence out of the blue in a burger joint, the bug is called MAC and even the terrifying clown Ronald came to present a trailer for the movie on television. It was a recurring prank by Paul Rudd on Conan O’Brien with his wheelchair fall scene and in the Japanese ending the paralyzed boy was shot to death.

A furbi with monkey pox? Gollum with a poorly healed hydrocellaphy? No! It’s Nuke! The alien friend. Sure enough, he also has a fixation for making friends with children. In this case, two brothers from the African savannah. The rest of the team consists of a missionary nun, a talking chimpanzee, and someone from NASA, for good measure. The result? One of the films with the worst rating on the Imdb page. Absurd and grandiose dance scenes, commodore 64 sounds and effects or papier-mâché costumes that crumble when they move. Grotesque and wonderful.

Direction: David Mirkin. Cast Chris Elliott Brian Doyle-Murray Robin Riker. One of the craziest episodes of the most amazing television series of the nineties. ‘Búscate la vida’ was an irreverent redoubt, full of absurd humor that would work perfectly in these times of ni-nis thirty years. During the twenty minutes of this episode, all the common places of the ‘alien friend’ subgenre were reviewed following Vomitón, a pimply and sticky alien that, when threatened or nervous, vomited in a jet on poor Chrish Elliot. In the end they ended up EATING it with potatoes.

The first Indian science fiction film? It was a little out of the wave to try to take advantage of the success of ET but it does not stop copying its sequences and staging. It also repeats moments from ‘Close Encounters of the Third Kind’, ‘Independence Day’ and even ‘Forrest Gump’. Indeed, the main character is a mentally handicapped person who receives powers from a friendly blue alien. Then dance, lose the alien, dance, rescue the alien and get the girl. And then they all dance. A Bollywood blockbuster for the whole family, to spend three hours with! in front of the TV.

The film “Titanic” will be re-released in 3D, in celebration of its 25th anniversary

Israel to allocate $6 million to create an Albert Einstein museum

Cazzu, girlfriend of Christian Nodal, arrives in Mexico with her Nena Trampa Tour