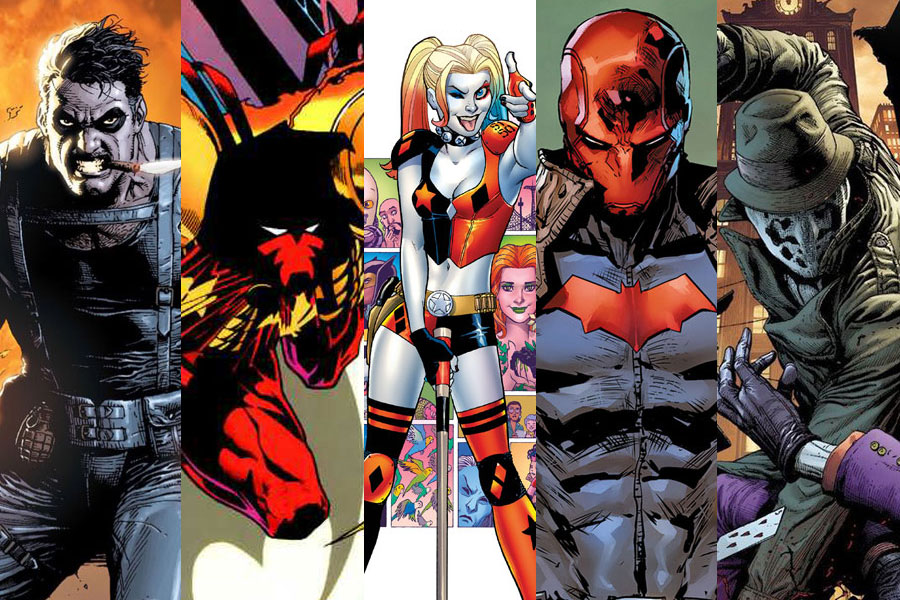 If you’re a fan of Azrael, Harley Quinn, or Constantine, antiheroes are your thing, and DC Comics has plenty for you in this category.

The antihero is a flexible category, where we will foolishly say that everything that does not fall into the categories of hero or villain fits. In DC Comics antiheroes abound, they are a very attractive category for the great writers that the publisher usually has.

We are talking about those characters who sometimes do good in a forced way, because they must agree with their enemies to combat a greater evil or because at that moment it suits them. Other times they act with non-legal, violent methods or that by themselves would also be classified as crimes.

Some antiheroes are for justice, but not for legality, they are those who do not support corruption at whatever level it occurs, even among police officers or magistrates.

As we said, DC Comics are experts at writing the stories of antiheroes, individuals who cross ethical lines or forget morals.

Next, we present our top ten DC Comics antiheroes, but not without first making a special mention of some great characters who have made this category great with their presence: Spectre, Etrigan, Bizarro, Jonah Hex, Deathstroke and Vigilante.

You can also read: Top 15: The best moments of the DC Animated Movie Universe

Despite pretending to be on the side of good, Edward Blake is one of the most amoral characters in living memory. Comedian is the starter for Watchmen, and the protagonist of one of the most memorable deaths in the history of sequential art.

It awaits you in our online store DC Comics Deluxe Before Watchmen: Comedian/Rorschach

A product of the madcap mentality of the 1980s, the Czarnian is more than hero or villain, a violent bounty hunter who does his job better than anyone else. This strange character knows how to channel his taste for taking lives by hiring himself as a mercenary, which includes participating in the side that pays the best.

One of the most acclaimed adventures of this character awaits you in our online store with DC Universe – Lobo: The Last Czarnian

Black Adam spent years as an evil villain who was an enemy of Shazam, until more complex times led him to revise his history to become one of the great antiheroes of DC Comics. His “justified violence” of his soon struck a chord with fans. So much so, that very soon he will make his film debut with his own production and played by superstar The Rock.

Jean-Paul Valley Jr. has been Azrael, a mental patient, drifter and Batman. He was raised to be the vigilante Azrael of the Order of Saint Dumas, but an encounter with Batman led to him being his replacement after the events known as The Fall of the Bat. However, his religious delusions turned him into a violent version of the Dark Knight, until he had to give up the mantle of the bat and roam the streets homeless.

If you don’t know its history, very soon DC Comics Mexico will bring you “The Sword of Azrael” within the Modern Classics collection.

John Constantine comes from a long family of magicians and from the mind of Alan Moore. Since his inception, he has been ahead of his time morally. Known for his cynicism, for his ease in allying himself with individuals that you would not introduce to your mother in order to achieve his mission, the history of this character places him on the side of the correct, although he is achieved by the wrong methods.

Jason Todd is synonymous with problems. The most rebellious Robin met his death by beating Joker, and returned as the Red Hood to torment Batman. However, that which originally led him to fight alongside the Dark Knight made him return to the path of justice as leader of the Outlaws. And though he’s rejoined the Bat-Family, the extreme methods he learned on the other side never seem to leave him.

The death of Robin, the event that marked the career of Jason Todd is available to you DC Deluxe – Batman: A death in the family

Dystopian fiction in comics reached its peak in two masterpieces: Watchmen and V For Vendetta. In the second, we meet the mysterious V, a terrorist who, in his fight with an authoritarian government, managed to jump to reality as a symbol of some social struggles.

Still haven’t read this masterpiece? Get it here!

Walter Joseph Kovacs is the strangest member of the Watchmen we meet in the graphic novel Watchmen. Coming from a childhood of deprivation and abuse, violent and schizoid and with strange customs, Rorschach is also the only one capable of being honest in order to understand the truth of the manipulated world in which the characters of Watchmen live. He is without a doubt one of our favorite antiheroes.

He debuted as a simple joker extra. However, the strength of the character and her motivations soon made her one of the most popular characters in the DC Universe. And despite the fact that she has gone from being a sidekick to a villain to a heroine to an antiheroine, a constant in her since her beginning is that it does not matter if her goals, generally just or detached from her conception of love, are on the side of the law or no, she will do whatever it takes to get to them.

In this top of DC Comics antiheroes and antiheroines, Catwoman is the furthest creation. With more than eighty years in tow, and surpassing characters who have changed the history of comics or who have starred in some of the most memorable pages of sequential art, Selina Kyle, the thief who stole Batman’s heart, is the queen of comics. antiheroes.

One of the most acclaimed stories of this character is waiting for you in DC Comics Deluxe – Catwoman: When You’re in Rome