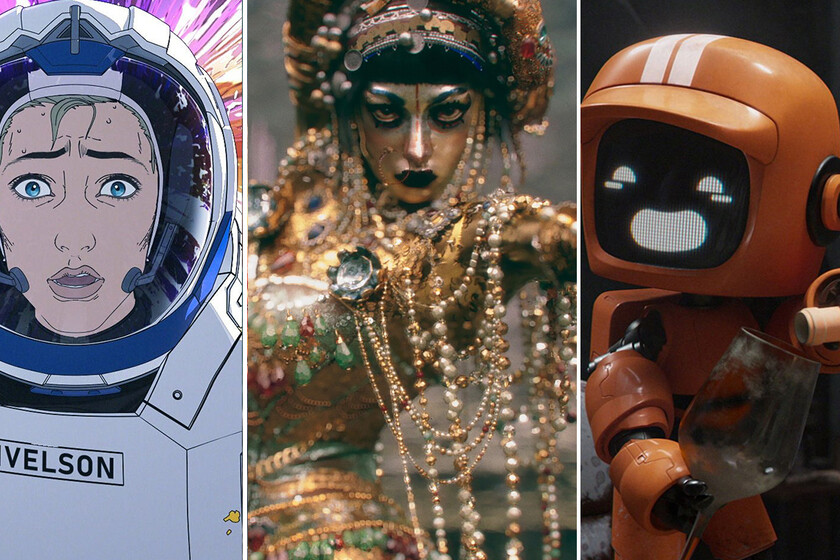 After its fantastically received debut in 2019 and a second season released in 2021, the ‘Love, Death & Robots’ short films have returned to Netflix with a ‘Vol. 3’ that, despite having the ups and downs of rigor present in any self-respecting anthology, boasts the best balance of quality to date.

In order not to lose the habit, and because we love to organize things, I propose to review the nine shorts from the last volume of the production by Tim Miller and David Fincher ordered from worst to best. A list that has been especially difficult to make and in which the upper and middle part of the table is very, very tight.


After falling in love with the magnificent ‘The drowned giant’ in the second season, Tim Miller himself has given me the biggest disappointment of this volume 3. A short film that has already could be considered cliché within the ‘Love, Death & Robots’ universe whose hyper-realistic bet collides with a decaffeinated production design, with a rushed narrative —and boring at the same time— and with a shoehorned house brand sex scene.

Almost as if they were the official mascots of ‘Love, Death & Robots’, K.-VRC, XBOT 4000 and Elena have returned in a new adventure directed by Patrick Osborne that works perfectly, but without any fanfare. An impeccable visual finish, a sociopolitical discourse with a tremendous bad drool and the tremendous charisma of its leading trio collide head-on with a narrative cadence weighed down by the absence of conflict.

Despite having the voices of Craig Ferguson and Dan Stevens, ‘Mason’s rats’ does not finish managing to stand out among the eclectic selection of short films for this third season. A refined narrative with a great sense of conflict, the occasional funny gag, robotic massacres and an adorable Scottish rat go hand in hand in an interchangeable piece in the ranking with the one that occupies the eighth position.

We enter the middle part of the table with this piece directed by director Jerome Chen, who has cut his teeth in the VFX department of feature films such as ‘Contact’, ‘Beowulf’ or Jumanji: Welcome to the jungle’. His great display of hyper-realistic animation, which is no longer surprising at this point, takes a backseat when he confronts a lovecraftian essence that has managed to captivate me despite the formulation of the proposal. I’m that easy.

5. ‘The very pulse of the machine’

With ‘The Own Pulse of the Machine’ we find ourselves before one of those cases in which the artistic section of a short film is above everything else. Probably the most visually beautiful piece of the entire third season, and a very interesting exercise in space science fiction with some breathtaking passages. Lucky that its duration is very tight, because it could have saturated more than necessary.

This little wonder shows that not all short films in the industry need to be 20 minutes long and take themselves terribly seriously. Robert Bisi’s high-speed zombie invasion is not only hilarious and agile; also leaves us a visual treatment in a tilt-shift key that is a pleasure to see among so much display of technical muscle and impossible renders. A perfect snack.

Jennifer Yuh Nelson, director of ‘Kung Fu Panda 2’ and its sequel, serves us on a silver platter what is probably ‘ the short of ‘Love, Death & Robots Vol. 3’ more “cool”. It may not be the best and the most solid, but it is pure excess in the eighties key, it has a current 2D animation but with a certain old flavor, it is full of violence, very out of turns and it is tremendously fun. Brutal.

Did anyone doubt that David Fincher’s debut in animation direction was going to be brilliant? The one from Denver signs this jewel that embrace the lovecraftian canons with a piece of about 20 impeccable minutes, with superb animation and production design, an evocative atmosphere, and a tremendously tight narrative that capitalizes on its footage. Figure the second, but there is a technical tie with the first position.

After leaving me half gas with his participation in the first season, and after winning the brand new Oscar for best animated short film, Alberti Mielgo returns to the fray with this sweeping fable about colonialism perfect artistically, conceptually and narratively. With a unique visual aspect that plays with the shutter and the camera in a suffocating way, an impeccable use of sound and scenes that are as crude as they are beautiful —that dance…—, ‘Jíbaro’ makes form and substance embrace in a single short.