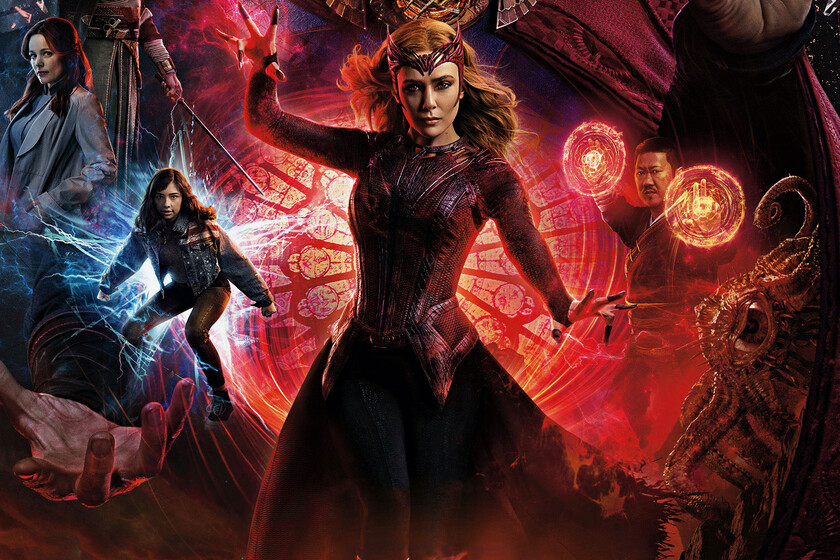 With the amazing ‘Moon Knight’ for Disney+ just finished, the Marvel Cinematic Universe continues to spin its inexhaustible narrative wheel by landing ‘Doctor Strange in the multiverse of madness’ in our movie theaters. An experience that, despite its potholes and specific procedures, manages to cajole thanks to his abundant personality and a Sam Raimi who has returned to his comfort zone in top form.

Of course, in the case of a feature film with the word “multiverse” in its title and that, moreover, is based on an IP as vast and rich as the marvelite, it was to be expected that this new adventure by Benedict Cumberbatch’s sorcerer would be loaded with stellar appearances that took advantage of the visits to the different parallel realities. Next, we will review them all.

The great barrage of cameos from ‘Doctor Strange in the Multiverse of Madness’ is condensed in the central part of the film, in which it is introduced in a narratively horrendous way—the way it suddenly slows down to make way for the parade of faces is terrible—to the members of the Illuminati: a supergroup created by Brian Michael Bendis in 2006 based, according to its author, on the Security Council of the United Nations.

Some of the most powerful heroes of the Marvel Universe are part of this group, such as Namor, Iron Man, Captain America, or Doctor Strange himself; but on the Earth where the scene takes place during the movie, the formation is a bit different…

One of the faces that figure in the Illuminati template that we know in ‘Doctor Strange in the Multiverse of Madness’ is that of Peggy Carter, the character played by Hayley Atwell whom we met in ‘Captain America: The First Avenger’. However, here she makes an appearance under the identity of the Captain Carter, the first avenger in this universe who took on the role after being injected with the supersoldier serum. We could already see her in ‘What if…?’, where she also wore a vibranium shield with the flag of the United Kingdom.

This one we did not expect. Although Black Bolt, King of the Inhumans, was a member of the Illuminati in the comics, the cancellation of the ABC series based on these characters made their appearance in the MCU unlikely. Well, in ‘Doctor Strange 2’ he has not only come back in style, but he has done it performed again by Anson Mount.

Another of the Illuminati of this Earth is Captain Marvel, but in this case it is not Carol Danvers, but Maria Rambeau. Lashana Lynch returns to put herself in the shoes of Danvers’s best friend, but crammed with cosmic powers… that don’t do her much good either.

Mixed emotions with the first appearance of Reed Richards in the Marvel Cinematic Universe. I have to admit that he has been a pleasure see the leader of the Fantastic Four played by John Krasinski on the big screen, but it seems that the team responsible for Marvel Studios is scanning social networks to make the fan service even more… that, fan service. What would you like Krasinski as Richards? Well, take two cups.

During many interviews, good old Patrick Stewart consistently denied the major until it was impossible for him to deny the major. The British has once again put himself in the shoes of Professor Charles Xavier —representative of the X-Men in the original Illuminati— five years after his participation in James Mangold’s fantastic ‘Logan’.

Of course, we wouldn’t be talking about a Marvel movie if it didn’t have a couple of post-credits scenes. In this case, the first is much more revealing than the second, but it is worth stopping and seeing who appears in them – although we will go into detail about its implications for the future of the MCU in another article.

In the first post-credits scene of ‘Doctor Strange in the Multiverse of Madness,’ a new character joins the increasingly chaotic shared universe. This is Clea, created by Stan Lee and Steve Dikto in the mid-1960s and played by Charlize Theron in the MCU; the Sorceress Supreme of the Dark Dimension. Best of all, her introduction opens the door to one of the great villains of The House of Ideas: the fearsome Dormammu.

We leave the best for last. A classic of Raimi’s brand productions and one of the faces most loved by fans of fantastic cinema: the one and only Bruce Campbelll. The actor, who gave life to the mythical Ash from the ‘Evil Dead’ saga, makes an appearance during the film playing a pizza street vendor in an alternative universe, and does a double in the second and last post-credits scene, finishing off the gag and closing the projection screaming at the camera “It’s over!”. Like this item.