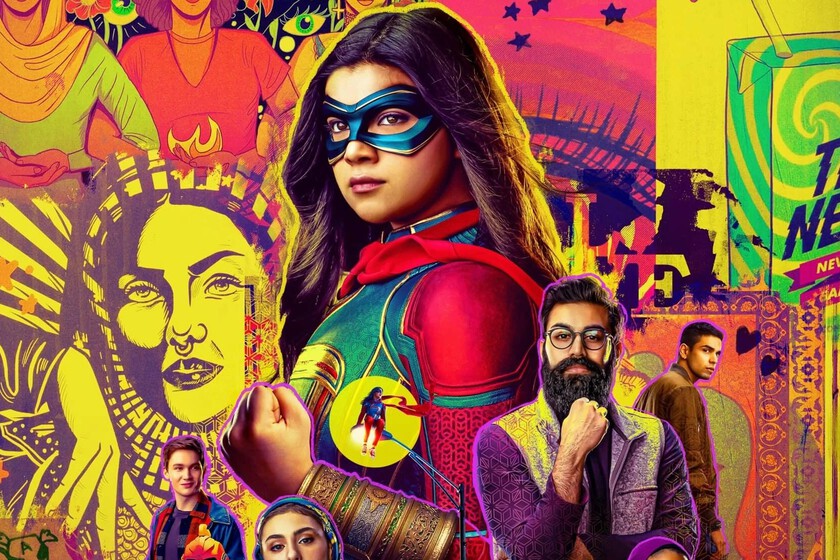 The Marvel Cinematic Universe has reached a point where it has so many superheroes on its payroll that it could have been content to continue telling new adventures of those already known to the public. However, the study led by Kevin Feig far from it is satisfied with that, and good proof of this are titles like ‘Shang-Chi and the legend of the ten rings’, ‘Eternals’, ‘Moon Knight’ or ‘Ms. Marvel’, the series that premieres Disney + this Wednesday June 8.

In it is noted a clear attempt to reach a different audience, as acknowledged by Feige himself in the press presentation of the series. At least that’s how it is during its first two episodes that I’ve been able to see, but the series is still the introduction of a character who will later make the leap to the big screen accompanying Carol Danvers from Brie Larson in ‘The Marvels’, so everything points to that changing.

That said, the start of ‘Ms. Marvel’ It really feels different from the rest of the adventures in this superhero universe.since here a youthful approach is chosen to a series that has much more in common with ‘I never’, the great Netflix series, than with ‘Iron Man’ or any other character presentation Marvel movie.

That leads to ‘Ms. Marvel’ is a very colorful series in which, at least initially, the presence of superheroes is more of an age-appropriate obsession than anything else. It’s like when a teenager becomes obsessed with a singer or an actor, the only thing that with superheroes as a model, especially Captain Marvel, the true role model for Kamala Khan.

There we have an entry point that allows ‘Ms. Marvel’ differentiate while gradually introduces the fact that the protagonist ends up getting powers. That also finds its support in a visual section full of background details to remind us of both the age of the protagonist and what obsesses her. In fact, this is something that is present on the screen from minute one of the series.

I am clear that there will be a certain sector of the public that rejects that initial proposal of ‘Ms. Marvel ‘and that there will even be those who consider it bullshit, but the truth is that she brings a special energy to the series, a necessary freshness so that she does not end up being another character within the great Marvel network. And essential to this is the great success that has been the signing of Iman Vellani to give life to Kamala Khan.

In such a series it was essential that the protagonist arouse sympathy in the viewer. Vellani is flawlessboth showing that enthusiasm necessary to infect the viewer and building a credible and approachable teenager, even for those viewers who have long left that stage of our lives behind.

The foundations of ‘Ms. Marvel’

The way to do it is once again by promoting comedy to gradually give way to the most visually ambitious moments, but here instead of influencing the usual excesses to which cinema and television usually link that age, they choose to focus more on her personality, on what has made her end up being a fan of superheroes. To mention a recent example, there ‘Ms. Marvel’ can remind fanaticism for a certain boy band of the protagonist of ‘Red’.

And it is that those who are looking for a great superhero show will have to be patient, and that is if that finally ends up coming, well ‘Ms. Marvel’ has other goals. And yes, already in its first two episodes we see Kamala use those newfound abilities, but the series takes it slow to introduce them instead of going out of the blue as a great supervillain. Of that, at least for now, there is no trace.

Everything related to superheroes is an addition, fundamental, but not the main thing. Neither is the fact that the protagonist is Muslimsomething that is also shown with respect and precision, but always keeping in mind that it is an important but not decisive factor in Kamala’s life, not something that defines her above everything else.

Having said that, it is clear to me that the series is bound to evolve in later episodes and that little by little it will be closer to the usual Marvel model. It is inevitable that this is the case, because here the links with that universe are marked from the outset and we already know the destination point. It is what it is, but while there is nothing wrong with enjoying that your foundations are different.

The start of ‘Ms. Marvel’ is refreshing, since it moves away from the usual Marvel coordinates to address the story of a teenager who is a big fan of these superheroes. Then the latter is already beginning to gain presence and will go more, but at least they go calmly and maintain that initial freshness.