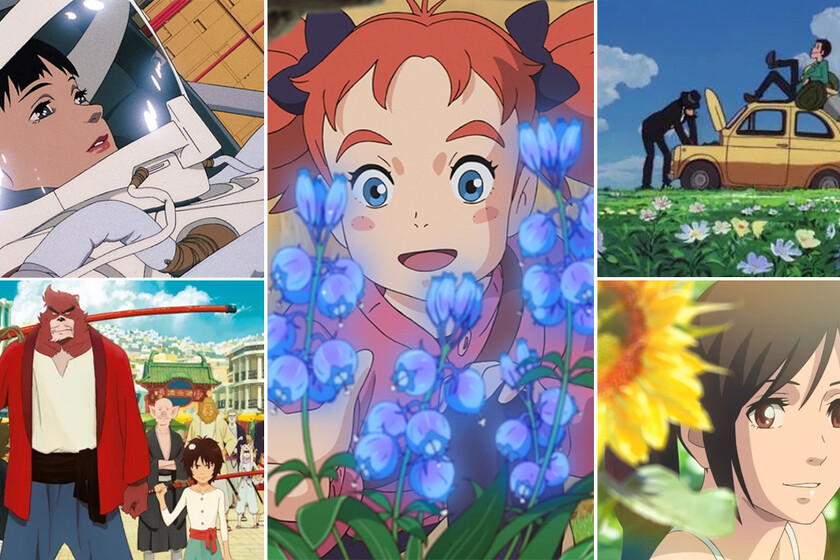 Studio Ghibli it has one very bad thing that unfortunately it cannot fight against: that it only has a limited number of films. While Hayao Miyazaki continues to work on his new project, it is very possible that you have already aired all the movies from the anime studio.

So here we leave you some recommendations with several anime movies that can be watched in streaming and that are ideal for fans of Studio Ghibli.

‘Mary and the Witch’s Flower’


‘Mary and the Witch’s Flower’ is an obvious choice to start with, as Studio Ponoc was founded by former Ghibli workers And it shows a lot in the animation style. The plot follows Marywho spends the summer holidays with his grandmother in the country and one night following some cats, comes across some bright flowers that give life to his broom and flies away.

During her journey, she sneaks into the country of witches, where everyone takes her for one more.

‘Penguin Highway’ It also has a certain Ghibli flavor with an attention to the details of the day to day and loads of charm that leaves you with a warm feeling in the body.

Aoyama He is a very peculiar and very precocious child for his age, with a great analytical capacity and who knows exactly how many days he has left until he finally becomes an adult. But all that becomes the same when an avalanche of penguins invade his town and the boy begins to investigate where they came from and why.

‘The Garden of Words’

Before the bombshell that was ‘Your Name’, makoto shinkai directed this emotional romantic film. Although it is only 46 minutes long, it is a profound reflection on loneliness and the process of becoming an adult.

Takao Akizuki is a fifteen-year-old apprentice shoemaker, who often meets a 27-year-old woman named yukari yukino in the garden of Shinjuku Gyoen. Both go to the garden on rainy mornings to avoid their responsibilities and escape from their respective routines.

‘Millennium actress’ is one of the masterpieces that he left us Satoshi Konand which is perfect for both anime fans and movie lovers. It is a story full of nostalgia and love for the medium, a lot of drama and also hope. And yes, outstanding and spectacular animation, settings and visuals.

Chiyoko Fujiwara was once the brightest star in Japanese cinema, but has been in seclusion for several decades. When one of her biggest fans manages to interview her for a documentary, Chiyoko begins to reminisce about her life through the movies she once starred in.

‘The boy and the beast’

Mamoru Hosoda He is another of the great anime directors of the moment, and any of his films also fit perfectly with Ghibli fans.

‘The boy and the beast’ Specifically, it is set in the Shibuya neighborhood of Tokyo and in a parallel fantastic kingdom. Ren has lost his parents and one day crosses the border to this other world, where he befriends a beast called Kumatetsu. Since then, the boy becomes a kind of apprentice for Kumatetsu and the two embark on a series of adventures to deal with loneliness.

‘The Girl Who Leapt Through Time’

We jump from one Mamoru Hosoda movie to another, although this time with a high school story with romantic touches in ‘The Girl Who Leapt Through Time’. Makoto She’s a normal high school student, until one day he is about to suffer a terrible accident and discovers that he can go back in time.

From this moment, Makoto begins to use his new powers to live his best life: repeating exams to get them right, playing matchmaker, avoiding awkward situations… But then he begins to discover that his actions have consequences.

One of the most significant elements of Ghibli is food and how they manage to animate it and represent it in two dimensions in such a way that it opens a hole in your stomach as it appears on the screen. ‘Flavours of Youth doesn’t shy away from delicious food, and it’s also a beautiful collection of nostalgic stories.

Through the food and the memories it awakens, this film shows us three different stories set in present-day China.

‘Kanna and the October Gods’

If the children’s adventures section of Ghibli is one of the ones that most attracts you, ‘Kanna and the gods of October’ is a very fun bet. In the town of Izumo, the ancient traditions are still very much alive, and according to the legends, every October certain deities gather in the town to begin a pilgrimage.

Kanna’s mother was in charge of collecting offerings for the gods of Izumo, but dies before she can complete her task. So kanna He must travel across Japan to make it to the annual meeting on time, but luckily he has the help of a young oni named Yato and a very special rabbit.

‘Lupin III: The Castle of Cagliostro’

Okay, it’s not Studio Ghibli, but we couldn’t miss out on this jewel of Hayao Miyazaki because it encompasses all the best of the classic era of the anime studio. ‘The Castle of Cagliostro’ is one of the best adventure movies you can faceand also one of the best from Lupine III.

Lupine III is a very famous thief, and after stealing a huge amount of money along with his partner Jigen, they discover that the banknotes are fake although of very good quality. These great fakes originate from the Duchy of Cagliostro, so the gang decides to visit the place to investigate more on the subject.

It costs 11 euros and is available in two colors

What drama would you act in with Woo Do Hwan? your dream story

“You already exhibited us!”: Emilio Azcárraga and Eugenio Derbez star in a fight on Twitter

This guest dress, on sale in Pedro del Hierro, now has a -25% discount