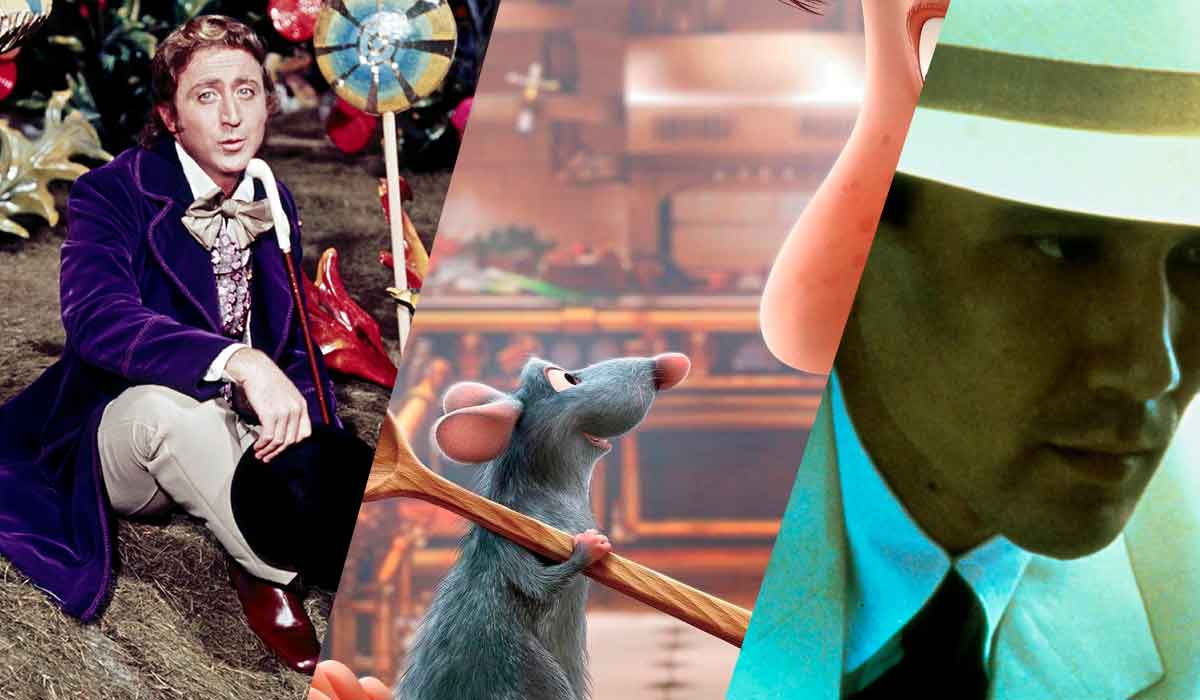 Just as food is of great importance in our daily lives and in different cultures around the world, it is also important in the cinema.

That’s why you can find many movies centered around food, of all genres and for all tastes. If you feel like exploring the best cinema based on cooking, here is a list of some of the most popular and critically acclaimed films. And, if you are good at cooking, you may even find some interesting recipe in them. Prepare your Carrefour brochures to search for ingredients at the best price, and sharpen your culinary eye with these food movies that have left their mark on film history!

Willy Wonka and the Chocolate Factory (1971)

Possibly one of the most legendary food movies of all time is the wildly popular Willy Wonka and the Chocolate Factory. No, we are not referring to the version of Tim Burton and Johnny Depp. We are talking about the popular film by Gene Wilder, who for many is the best representation of the star character of Roald Dahl.

In addition to its unique aesthetic, which has gone down in cinema history and even beyond through popular imagination and many internet memes, this film also has the added bonus of having been produced during the lifetime of Roald Dahl, an exceptional author. which shares some really curious characteristics with Antoine de Saint-Exupéry, the creator of The Little Prince. Did you know that both had been war aviators, as well as writers?

For many people, the main animated film that comes to mind when we talk about food is probably Ratatouillea Pixar film based on the popular French food dish and starring a rat who finds himself determined to be a chef in one of the cities with the most exquisite palates in the world.

With this movie you will be able to enjoy a truly moving story in the purest Pixar style, with some touches of nostalgia that will remind you of the famous 80’s movie ‘An American Tail’, titled in Spanish ‘Fievel and the new world’also starring a mouse who, on this occasion, is on a very difficult journey to emigrate to the United States.

This is one of the best food movies of the ’90s, and it features big names like Ian Holm, Stanley Tucci, and Tony Shalhoub, who you may remember best by the name of his most famous role: the flamboyant detective. ‘Monk’.

The theme of Big Night goes through great economic problems in a restaurant, despite the talent of its chef (Tony Shalhoub). A singular event during a unique night, and the stellar appearances of great Hollywood figures such as Marc Anthony or Liev Shreiber, will be in charge of completely changing the destiny of this restaurant.

This famous Mexican film has received many awards thanks to its excellent staging of a setting marked by magical realism. Directed by Alfonso Arau, with a script based on the novel by Laura Esquivel, this film will show you a family plot marked by the frustrated marriage of a girl who has an excellent talent for cooking.

You probably won’t want to replicate the recipes in this movie, as they sometimes involve the use of suffering and tears to create dishes that can make anyone’s night sour. Although, if you want to ruin an evening with a completely tragic recipe, then you can take notes from this movie.

Considered one of the great masterpieces of universal cinema, Tampopo is a Japanese film directed by Jûzô Itami that shows the lives of a series of people who work around a small Japanese restaurant. The misery around them and the loneliness of each of the characters will leave you open-mouthed in a society where excessive individualism prevents its protagonists from enjoying satisfactory social ties.

The excellent production of the film, a masterful script and a unique aesthetic make Tampopo a true work of art that you cannot miss if you want to enjoy the best universal cinema based on food.

The gastronomic cinema has much more to offer you!

The films that we have selected are just a small representation of a wide selection of gastronomic cinematographic works that have been able to carve out a niche for themselves in history. Other movies like Julie & Julia (2009), Sideways (2004), Chef (2014) or Uncorked (2020) they also deserve your consideration if you like this genre and want to discover some of its most representative works.

Clear out your kitchen and prepare your best ingredients, because these movies will whet your appetite and pique your interest in cooking truly unique dishes!

Stranger Things will have 2 episodes that will be movies

Gamora will miss a Guardians of the Galaxy event