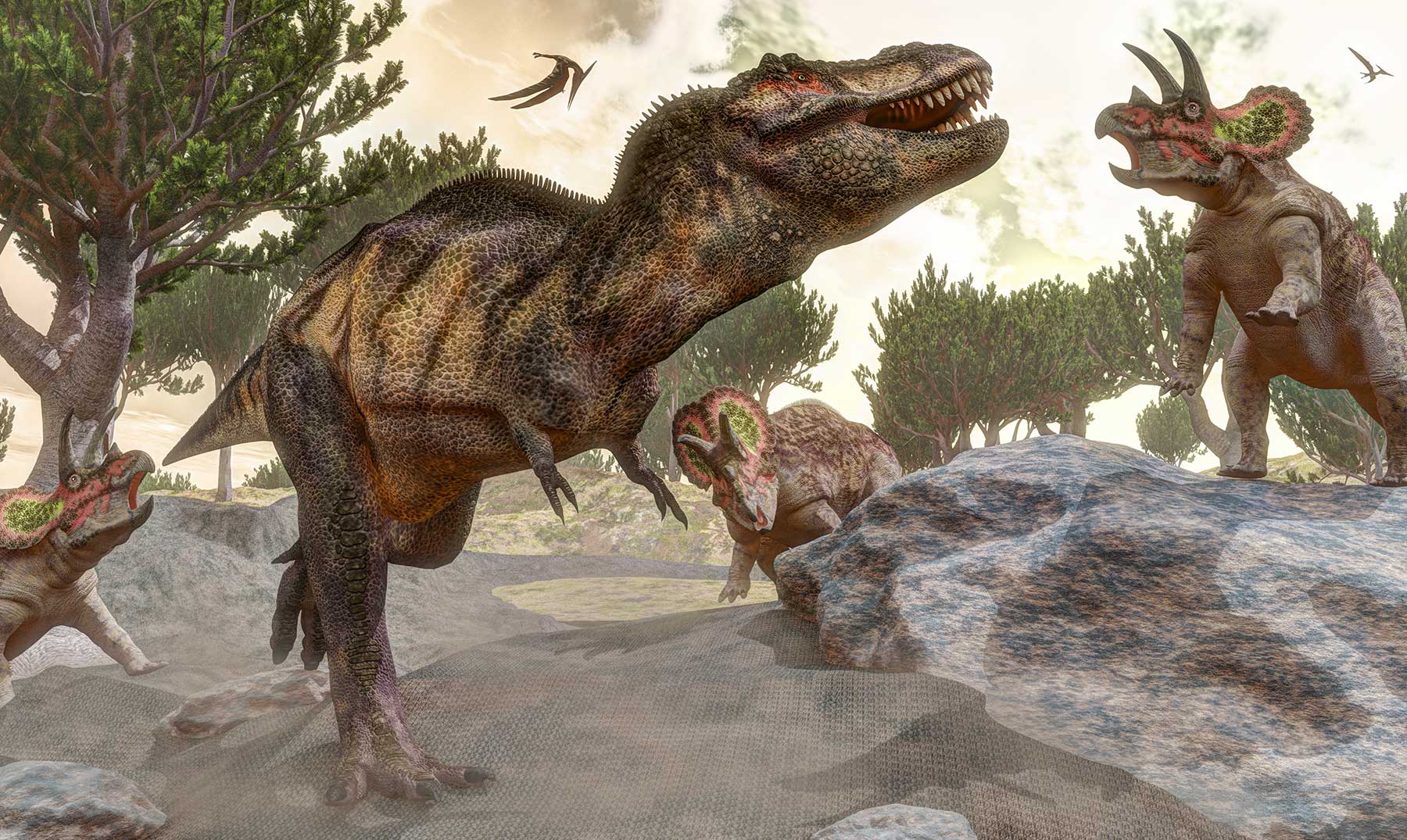 You want to know fun facts about dinosaurs? Without a doubt, dinosaurs were fascinating animals, full of curiosities, that once lived in the planet Earth and they were the masters of everything that surrounds us today.

Most of us are fascinated by learning about these very special animals that left their mark on the world through fossils. You have probably seen them in films, series and even in children’s toys. That’s not all, a percentage of men have had an attraction to those prehistoric animals that owned the planet in the past.

But… Do we know everything about them? In this Supercurious post we will take a tour of those curiosities about dinosaurs that you may not have known about. Shall we discover them together?

What is a dinosaur?

Dinosaurs were a group of extinct animals that lived during the Mesozoic period, from approximately 252 to 65 million years ago. There were many types of dinosaurs of different sizes and shapes, including some that were herbivorous and others that were carnivorous.

The two main groups of dinosaurs based on hip shape were Saurischians and Ornithischians. Furthermore, they disappeared approximately 65 million years ago. There are many theories about the extinction of the dinosaurs, but the most famous are that it was due to a catastrophic event, such as an asteroid or a climate change.

Studies of dinosaur fossils have helped scientists understand more about their biology, behavior, and evolutionary relationships. Research continues in this field to understand how they lived and why they disappeared.

Next, you will know different curiosities of dinosaurs.

Already with this brief introduction to the fantastic prehistoric monsters, it is time to know the best 20 dinosaur curiosities they will surprise you. Do you dare to meet them? Take a pencil and paper, write them down.

1. We found out about the existence of dinosaurs from fossil remains

The first of our curiosities about dinosaurs is that we have discovered the existence of these animals through the fossil bones found in sedimentary rocks, they have accumulated those bones through millions of years.

Fossil remains include bones, footprints, eggs, and others left over after the dinosaurs died out millions of years ago. Scientists study these remains to understand how they looked, lived, and related to their environment. It has even tried to reveal what color dinosaurs were.

2. Time of appearance of dinosaurs

Do you know which animals existed before the dinosaurs? Various studies have concluded that dinosaurs made their appearance during the triassic period (approximately 248 million years ago) and they were also the dominant species until the arrival of the Cretaceous period (65 million years ago).

Scientists Say Tyrannosaurus Rex Was the Slowest Dinosaur, (with a speed very similar to that of humans: 29 km per hour), due to its long and heavy tail. Are you surprised by one of the biggest fun facts about dinosaurs?

4. The fastest prehistoric animal, one of the most impressive dinosaur facts

Without a doubt, it is one of the interesting facts about dinosaurs. Different studies have discovered, through various scientific investigations, that the Compsognathus It was the fastest dinosaur.

This speed (64 km per hour) was due to its small size and weight (approximately 3 kg).

In addition, it lived in the Upper Jurassic period, in the territory that we know today as Europe.

5. At the time of the dinosaurs there were no continents

The continents were different in prehistoric times, there was only a small landmass known as Pangea. Then there was an amazing discovery: this piece of land was separated to form what we know today as continents.

The following of the curiosities of dinosaurs will surprise you. Through various studies on fossil remains, the smallest dinosaur would have been the Compsognathus, of a size very similar to current chickens. Also, the diet of these dinosaurs was based on insects, lizards and eggs of other dinosaurs.

7. Mass extinction, one of the curious facts about dinosaurs

Scientists and researchers maintain that the dinosaurs became extinct approximately 66 million years ago (at the end of the Cretaceous period) apparently due to the impact of an asteroid in the City of Chicxulub (coast of Mexico), that It produced a huge impact, cooling the planet and killing all the dinosaurs.

8. Discovery of the first dinosaur bone

The first dinosaur bone was discovered in China a thousand years ago. In principle, the Chinese believed that it was the bone of a dragon because of their millenary belief in these beings. Did you know these fun facts about dinosaurs? It is certainly surprising apparently the dragons were the same animals of prehistory. It will definitely be to add to the curiosities of dragons.

9. The Tyrannosaurus Rex was a scavenger

The Tyrannosaurus was a dangerous dinosaur, they would attack any other animal. It has even been seen that it was one of the scavengers of prehistoric times. A bit paradoxical, it is known that also they were excellent at raising their childrenThey protected them at all times.

The least protective dinosaurs with their young was the Argentinosaurus (Sauropod), which left its eggs or young to chance. That is, they were not protective parents.

10. The dinosaur with the longest claws

With claws that hung down and that They were about a meter long, Therizinosaurus take the top spot. In addition, the legs of these animals were about 2.7 meters long and were made up of three huge toes with very sharp claws. Despite similar characteristics, these dinosaurs were herbivorous.

According to the researchers, they could reach live up to 100 years, with Compsognathus longipes being the dinosaur that has lived the longest. Does it surprise you? Without a doubt, it is one of the most impressive dinosaur curiosities.

One of the most incredible curious and interesting facts about dinosaurs talks about the Ankilosaurus, one of the most amazing prehistoric animals. Its body structure was covered with a large shell (armor) that weighed many tons and that protected it from other predators.

Also, the bones of his skull and other parts of his body were joined togethergenerating more connections between bones than the rest of the dinosaurs.

13. Evolution of birds from dinosaurs

According to scientific discoveries, our birds evolved from dinosaurs. Fossil remains of feathered dinosaurs have been found and there is even evidence that the structure of the bones of some species is similar to that of birds (hollow and light bones, slender and long legs). Undoubtedly one of the interesting facts about dinosaurs that surprise us the most.

14. The most feared dinosaur

With amazing dimensions, for example: two short upper limbs, a huge tail, very powerful legs, Tyrannosaurus Rex was the most feared dinosaur. In addition, it could measure about 4 meters in height and about 13 meters in length.

The females expelled from their reproductive system their hatchlings in the form of eggsalthough it is unknown today in what way they mated, since the genitals cannot leave genetic information like fossil remains.

16. The dinosaurs were of various colors

which color were the dinosaurs? Although it was always held that they were only green, recent studies seem to have confirmed that they were made up of various colors in different shades. Also, they may have had feathers and not scales.without a doubt, it is one of the greatest curious and interesting facts about dinosaurs ever told.

17. There were omnivorous dinosaurs

Although most dinosaurs were herbivorous, there are studies that show the existence of species whose diet was both vegetables and meat.

18. Flying dinosaurs had a wingspan of up to 10 meters.

The wingspan of the Pterodactyl could vary depending on the species, but in general most species had a wingspan of wings of at least 3 meters.

19. There were bipedal dinosaurs

Sauropods and some theropods were quadrupedal, while other theropods and ornithopods were bipedal. Bipedal dinosaurs were able to walk on two legs. and some of them were capable of running at high speeds.

20. They were social animals, one of the most interesting dinosaur facts

Yes, some studies suggest that some dinosaurs were social animals and lived in herds or groups. This is based on the observation of grouping patterns in fossils. and in the interpretation of anatomical characteristics together with the behavior of dinosaurs.

For example, Sauropods, such as Diplodocus or Brachiosaurus, have been suggested to live in groups due to the presence of several young and adult specimens in a single fossil location.

Have you been surprised by fun facts about dinosaurs as much as us? We hope that this post has been to your liking and that you have learned more about these incredible animals. See you in a next article, supercurious.

The Offering (2022) review: a curious sample of horror films with Hebrew mythology that despite being better than ‘M3gan’ does not reach its potential for abusing scares

13 Mysteries of the Universe | The most amazing and disturbing facts

Cats Curiosities | 25 curious facts that you did not know!

First trailer of the series dubbed into Spanish

The definitive guide for your next visit to Vancouver