16 sweets from around the world that look strange but are super delicious. 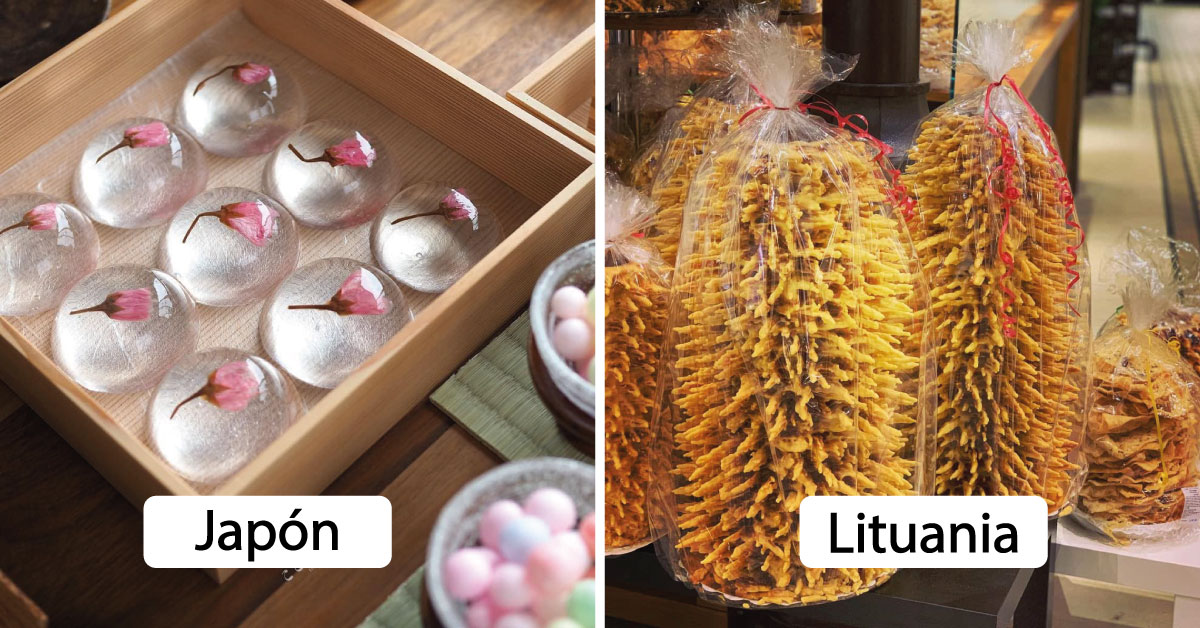 Dessert is the best part of dinner. It’s that moment where after a long day at work, when you finish eating and end it all with a sweet treat. Everyone has their favorite candy, from apple pie, chocolate cake, crepes, or a simple caramel lollipop. Surely your mouth watered thinking about all these delights. However, there are those who think that the only desserts in the world are cake or candy. Throughout the planet there are all kinds of sweets and candies that few know about but that all people should try at least once in their lives.

In many countries there are amazing sweet dishes, but they have such unusual recipes that most visitors prefer to appreciate with their eyes. Although they have a strange appearance or an incomprehensible combination, when you try them you can find incredible flavors. Therefore, as a rule, only daring gourmets with a sweet tooth decide to indulge themselves with extravagant novelties.

This is an unusual cake. To prepare it you need a mixture of eggs, milk and condensed milk. This is poured into the pumpkin and baked until cooked.

This dessert, prepared to resemble a drop of rain, has been very popular among the Japanese since 2014. It is made from water and agar (a gelatinous substance), accompanied with syrup or honey and thanks to the fact that it is low in calories but sweet you can eat it without weighing on your conscience.

Yokan is a gelatinous dessert made of sweet bean jam and agar. This one in particular combines matcha tea with blueberries.

American birthday cake, consisting of three cakes in popular classic flavors: apple, pumpkin, and cherry. All cakes are baked separately, and then stacked on top of each other and decorated at the discretion of the cook.

Sweet Turkish pudding made from chicken fillet. Previously, this dessert was only served in the sultan’s palace. Considered a traditional dish.

Soft almond jelly. It has a pronounced nutty aftertaste.

A fluffy cake made from yeast dough in coconut milk, which is necessarily baked in a closed pan. It is a Muslim dish from India that is sold in markets called: Mamak, it can also be found in some countries such as: Malaysia, Indonesia, Singapore, Brunei and Yemen where it is called motabbag which means “made from leaves”.

Ais kacang is a dessert eaten in Malaysia and Singapore. It is also popularly known as air batu campur in Malaysia. It tastes sweet and consists mainly of ice served with sweet flavored syrup.

Such an exotic dessert will not be to everyone’s taste. However, in Thailand, they are just crazy about them.

It is a typical sweet in India. It is made by frying a mixture of a very liquid dough and soaked in syrup and forming chaotic rings, sometimes very similar to pretzels.

The candy is made by pouring red-hot maple sap onto snow. Then you need to take some kind of stick, string the resulting caramel on it and eat it with pleasure.

Šakotis is made from flour, sugar, butter, natural sour cream, vanilla sugar, and eggs. In the traditional Šakotis cooking process, no flavors, enhancers, additives or spices are added to it.

Cendol is a traditional sweet and ice cream dessert. Contains green rice flour jelly drops, coconut milk and palm sugar syrup. Rice jelly is necessarily made in the form of noodles. Therefore, some tourists mistakenly think that in front of them is not a dessert, but a main course.

Osmanthus is a tea plant. It has a fruity-floral aroma of apricot.

One of the favorite desserts in the Kansai region of Japan. Before frying, the leaves are thoroughly washed, salted for some time in barrels, and then taken out and fried in the batter.

The list of the best singers in the world

Born Again is great, and he’s wearing the yellow suit!