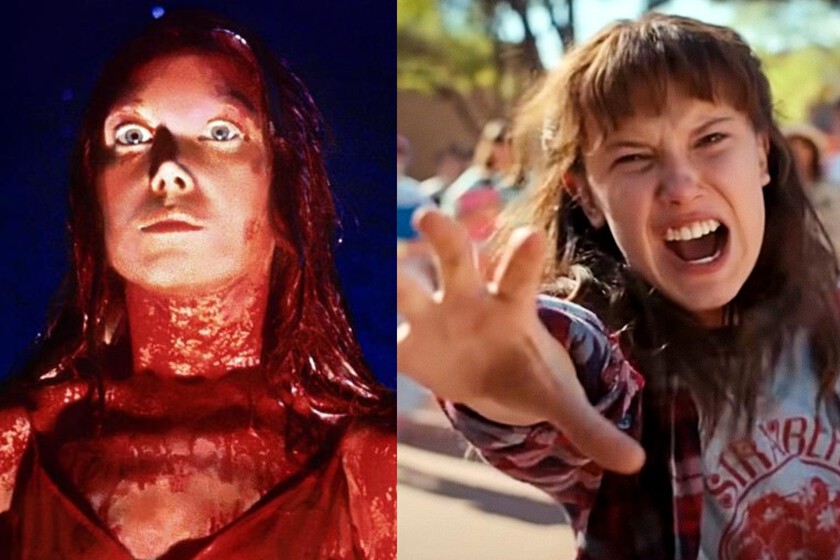 Since its first season, ‘Stranger Things’ has been characterized by its continuous references to eighties movies, especially within the horror and adventure genre. This season 4 was not going to be less and it is coming full of easter eggs and winks like the ones we discuss below.

Of course, SPOILERS of the entire season and of the aforementioned films, you have been warned.


Stephen King’s work adapted in 1976 by Brian De Palma (we will do the 2013 a favor by ignoring it) is one of the clear references for the plot of Eleven this season. The scene where the characters go skating and the high school bully and her entourage corner her to end up pouring a milkshake all over her, inevitably reminds us of when they throw the bucket of blood at Carrie. Sometimes “normal” people are scarier than any Demogorgon.

‘The silence of the lambs’

Another of the scenes that is a clear tribute, in this case to a 90s film: when Nancy and Robin go in to see Victor Creel at the sanatorium.they cross the corridors and arrive at her cell reproducing almost shot by shot of Clarice’s first visit to Dr. Hannibal Lecter.

The entire plot of Vecna ​​in itself is very reminiscent of one of the sagas slasher most famous: a monster that drags you into a reality where you feel vulnerable and plays with your fears to cause you a cruel and painful death. However, the most obvious wink is the actor who plays Victor Creel, Robert Englundwhich is the same one who once played Freddy Krueger.

We get several references to the galactic saga this season: Dustin quoting Han Solo (“Never tell me the odds”), Jonathan and Will watching the ewoks animated series and the flying creatures of the Upside Down World, which are inspired by the Mynocks.

If you are a fan of Marvel, surely you will not have missed the fact that the ‘Dungeons and Dragons’ club to which Mike and his friends belong, ‘Hellfire Club’, has the same name as one of the groups of mutants from ‘X-Men’. Not forgetting that Dustin calls the invention he makes with the computer to locate Eddie ‘Brain’.

‘The rebels of science’

Another of the programs that the characters watch at some point during the season is this Australian series (‘Misfits of science’, in the original) that is not very well known in these parts and that was about superheroes who fight crime. On screen we see Courtney Coxthat played a teenager with telekinetic powers.

‘The Lord of the rings’

Definitively, Mordor and the Upside Down World have certain things in common and this is what Eddie points out when they talk about getting into the portal and compares it to going into Mordor to stop Sauron. He also mentions “the burning of the Shire” to refer to how Hawkins is being ravaged by hate and fear.

We already knew that the Hawkins group was a fan of Ghostbusters when we saw them in costume in season 2 and, in this one, we find the easter egg in Dustin’s backpackwhere we see a pin of the Ivan Reitman movie logo.

When Lucas and Max are investigating Victor Creel’s house, Lucas makes a joke saying that, if you play the piano well, a secret door may open. That reminds us of the Richard Donner movie, in which Andy had to play the piano perfectly to get One-Eyed Willy’s treasure.

There are also several references to the Alan Moore comic, in relation to one of his characters: Doctor Manhattan. There is a certain parallelism between this character and 001, since both were ordinary people before suffering a supernatural event that makes them all-powerful. is also the figure of the clockwhich is an important element in both stories: in ‘Stranger Things’ they constantly hit the Creel’s wall clock and, in ‘Watchmen’, the character’s father was a watchmaker,

We see the most direct reference when 001 tells his story and he does it with the song ‘Pruit Igoe and Prophecies’ in the background, the same one used in Zack Snyder’s adaptation of the comic just as Doctor Manhattan was decomposing in the particle accelerator,

In the plot of ‘Akira’ we also find some children who have been victims of scientific experiments and that, as a result, they begin to manifest supernatural abilities. Like Tetsuo, 001 possesses immense and uncontrollable power, posing a threat to others. Even the moment when he confronts Eleven and ends up disintegrating into Vecna ​​is reminiscent of when the antagonist of ‘Akira’ is consumed and disfigured by its own power.